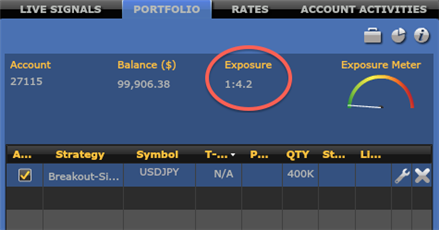 Summary: Over this four part article series, we’re going to introduce and explain the basics of system trading. In our last article, System Trading 101, we introduced this popular method of speculation. In this article we focus on risk management; and in subsequent pieces we will delve into the topics of system evaluation and diversification.

When employing a system-trading approach, traders could be in a strategy that is producing multiple trades with multiple positions in a very short period of time.

Whereas a trader previously may have traded the Japanese Yen by taking a couple of positions over a single trading session; employing a system to do so could mean placing many more trades over multiple sessions. And since a system can be traded in an automated fashion, it can be kept ‘on’ 24 hours a day.

The topic of risk management is of extreme importance to the discretionary trader, often being seen as more necessary than optional for long-term success in markets. To the system trader, this is perhaps even more important as the trading strategy is even more under the microscope given that the trader won’t necessarily be pulling the trigger on each and every trade produced.

One of the worst feelings a trader can get is when they check on their system, and realize a catastrophic failure has amounted to a 20% chunk of their account. In some cases, this can even deter new system traders from fully exploring the most relevant way of speculating in financial markets. After all, many banks and institutions trade the FX market in this fashion, but they don't do so by gambling a chunk of their trading capital on one solitary system or idea. What follows are suggestions for how you can do the same.

This is probably the most important element of risk management with a system trading approach, as the potential for any one strategy to be ‘out of favor’ at any one time can be fairly high. If market conditions are pensive and volatile, a breakout strategy can be the best option.... but eventually prices are going to settle down, and that breakout strategy can become a costly beast when markets become range bound, as traders get wicked into long positions just before prices ‘revert to the mean,’ or move lower against the trader’s long position.

Keeping leverage at 5:1 or less can help ensure that these transitions don’t eat away the trader’s entire account too quickly. In the DailyFX Traits of Successful Traders research, we found that traders using lower levels of leverage faired far better than those using exorbitant levels of 25:1 or more.

The Portfolio tab in Mirror Trader shows the total leverage being used under the ‘Exposure’ heading. The above example is using 4.2-to-1 leverage, inside of our 5-to-1 parameter.

2. Look Deeper than the Equity Curve

One of the dangerous aspects of trading a system solely because of its recent performance is the fact that you may not be seeing all of the potential downside. This potential downside is often expressed as maximum drawdown, which is the most that a strategy has lost before going on to find profitability.

In the table above, you can see that there are three total drawdown periods highlighted in red. Notice that June and July are considered one period, as the losses from June continued into July, and the strategy did not move back to profitability until August. This information can be plotted as an equity curve, which is below. 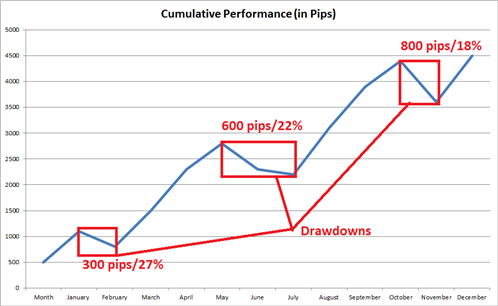 Despite being the smallest number of pips lost, February represents the Max Drawdown period as it was the largest percentage loss seen in the strategy.

Max drawdown is usually expressed in percentage form, as a percentage of the cumulative performance before the drawdown started. So, in the above graphic, the max drawdown was the 27%, seen in February, even though it was the smallest drawdown in total number of pips. This is because it had retraced 27% of the gains before going on to continued profitability, whereas the subsequent drawdowns were smaller on a percentage basis (22% and 18% respectively).

Examining drawdowns can be important because it can expose bad risk management or just a bad strategy in general. For instance, if a trader used a 10 pip profit target, with a 1,000 pip stop - they could likely form a beautiful equity curve that shows strong and consistent gains. But the reason for that is because the losing trades or positions take so much longer to hit their stop-loss. Surely, some trades will end up finding their way back to their initial 10 pip profit target after facing 50, 100, or 500 pip losses.

But not all will... and when those that don’t hit their 1,000 pip stop, the profitability of the strategy will become massively impacted and that equity curve can change from beautiful to catastrophe over one or two trades. It would take 101 successful 10 pip profit targets to be met before a 1,000 pip stop could be absorbed with the strategy retaining profitability. This would mean the trader would need a greater than 99% success ratio in their strategy.

So, while the equity curve of the strategy may look attractive before any of those stops are hit, it does little to actually expose the weaknesses of the strategy to the trader not looking deeper than the curve itself.

In the FXCM Mirror Trader platform, max drawdown is shown in terms of the trader’s account size. So, in the graphic below - the ‘max drawdown’ quotient shows how much of the traders account could have been drawn down at any one time in the past.

Perhaps one of the biggest benefits of system trading is that it allows the trader to choose the right strategy for the right market, and balancing the two approaches actually becomes possible. Diversification is a necessity for retirement planners, and investors - but it can also be beneficial to traders as well.

In our last article, we looked at a very recent scenario where a trader employed a breakout strategy on USDJPY ahead of a Bank of Japan announcement, while the same trader employed a range strategy on EURUSD. This way, our trader was able to appropriately match their approach with automated strategies based on how each pair had been trading or was expected to trade given the upcoming economic docket.

A Diversified Approach on Mirror Trader 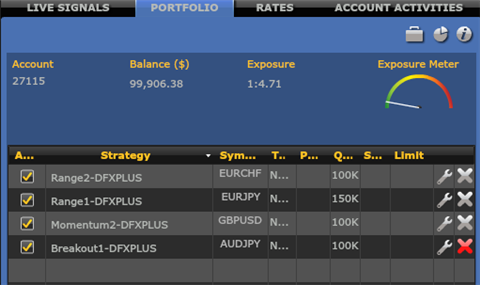 In this example, the trader has diversified their approach amongst four systems; with total leverage inside of the 5-to-1 parameters. Notice the extra weighting in EURJPY being used so that the trader can increase their exposure in any system or pairing they feel particularly strong about.

Diversification can be a key part of managing the risk of the system trader, and there are numerous ways of doing this. In the fourth part of our series, we’ll focus specifically on diversification and how traders can begin to build models to accomplish their goals when using a system trading approach.

Want to learn more about Mirror Trader? Join us for a live walkthrough Wednesdays at 3PM ET.

New to the FX Market? Save hours in figuring out what Forex trading is all about.

Take this free 20 minutes ‘New to FX’ course presented by DailyFX Education. In the course, you will learn about the basics of a Forex transaction, what leverage is, and how to determine an appropriate amount of leverage in your trading.