Article Summary: This article will walk through 2 trade setups, presented via Price Action as outlined in our guide on the subject, The Forex Trader’s Guide to Price Action. Following the two current trade setups, an analysis of last week’s position(s) will follow with a description of how previously identified Price Action Setups have fared.

The New Year has started in ceremonious fashion for traders in the FX market, as volatility has permeated into many charts of traders’ favorite pairings.

Traders are always attempting to stay in front of the news: As in, if a positive news announcement is expected – markets will often begin pricing that information in before the actual announcement takes place. This is nothing new, as it has been coined ‘buy the rumor, sell the news.’

And given the current circumstances, in which Central Banks have telegraphed and followed-through with expected intervention announcements in recent past, many markets find themselves in the precarious position of being in an awkward position for a reversal.

Buying into such trends can prove daunting: Sure, the trend has been strong, but for how much longer can they continue?

This is where price action, and risk management can be a huge benefit to traders, and these are central to the two setups below.

It might seem hard to remember, but for much of the first portion of 2012 it was increasingly difficult to make a case for going long EURUSD. That all changed on July 24th, when Mario Draghi pledged European Central Bank support for future problems that may arise from the European Debt Crisis. And while these pledges left much to be desired from analysts and economists alike, they have provided satiety to the massive down-trends put in the pair for the first half of 2012.

A litany of factors on top of the Draghi announcement helped provide support to the pair. In September, Ben Bernanke pledged Central Bank support in The United States with QE3. Later in December, Bernanke extended the Operation Twist intevention program as well: In total, providing $85 billion per month to financial markets.

When markets began the year, they had a nice surprise announcement to work with: Congress in the United States agreed to a deal to extend the Bush-era tax cuts, which was a major part of contention around the ‘Fiscal Cliff.’

And from the chart above, its apparent – quite a bit of good news is currently priced into EURUSD.

But its not all roses and sunshine for the EURUSD: Despite coming to terms on a deal to extend tax cuts, The United States has a potentially larger political quandry on its hands in the coming months that is starting to bring more of an impact to markets. The United States is nearing its debt limit, and there is a contentious debate raging in Congress over planned upcoming spending cuts.

Last night, Germany started to show signs of stress as 4th quarter GDP showed a contraction of .5% (Annualized at 2%). This is extremely worrisome, as Germany avoided recession for most of the European Debt Crisis, and functioned as somewhat of a stallwart for the European economy as a whole.

Suffice it to say – we’re not out of the woods yet. But by judging from the EURUSD chart, one might not know that; and it’s disconnects like this that can lead to promising trade opportunities.

After moving all the way up to the 1.3400 Psychological level, EURUSD has faced selling pressure coming into the market, and given the circumstances of the global economy – this makes sense.

But what makes this trade attractive is the possible Risk-Reward ratio, in which traders could potentially caputre a very large move with a very small amount of risk allocated towards the trade. 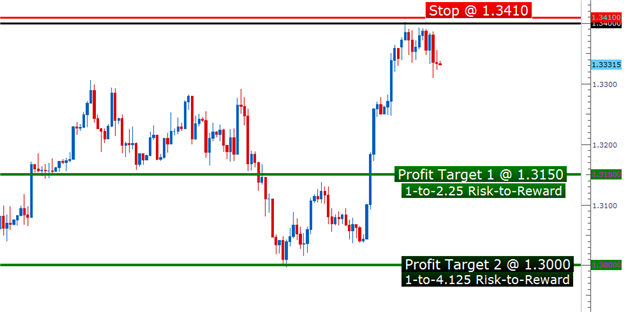 On the other side of the world, Chinese data has come in the spotlight again – and the implications for Australia can be huge. The Australian Dollar was previously one of the strongest currencies when the carry trade was in order through 2010 and the first portion of 2011. Last year, 2012, was far different for the Aussie. After falling below 1.0600 in March of 2012, the pair was unable to put in a daily close above the 1.0600 threshold.

Interestingly enough, the pair made an approach towards this 1.0600 marker shortly after the open of the new year, and was, once again – unable to break and stay above.

This presents potential opportunity; especially considering that a large piece of news is expected out of China, and the strong trading relationship between China and Australia can see a signficant portion of that optimism filter into the Aussie.

This is a slightly different trade though, as this is a conditional order that is only set to trigger provided we get price moving above 1.0600. The full setup is below: 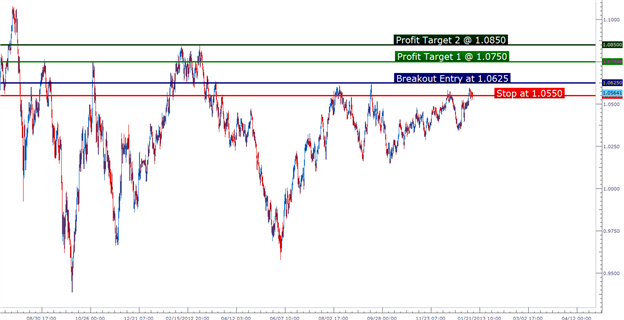 If Chinese GDP comes out better than expected, and further– if the global economy looks poised to grow and continue with optimism that’s been seen to open up 2013, AUDUSD may reflect that in breaking above this long-held resistance, and if that takes place – the breakout order can come into effect. The breakout entry is set just slightly outside of the high that was hit since March 20.

In last week’s Price Action Setups, we took one position in EURJPY, and the pair made a strong ascent directly to the second profit target of 117.50. The continued optimism in Japan and Europe contributed to some very strong movement in the pair last week, and that can certainly continue for the week ahead.

Would you like a customized curriculum to walk you through Trading Education?

Take our Trader IQ quiz and receive a full lesson plan with numerous free resources to expand your information arsenal.