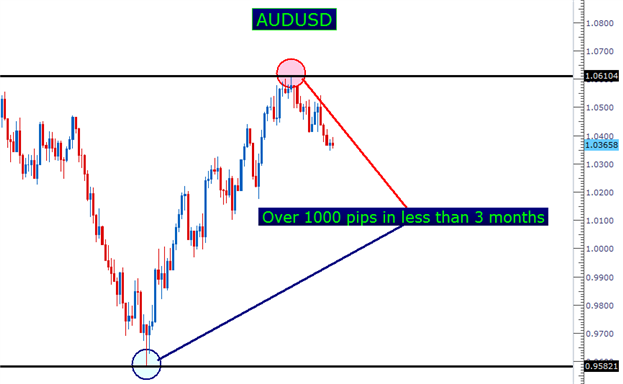 One of the more exciting trading strategies is also one of the most dangerous, and that is trading reversals.

After all, who wouldn’t have liked to hit the AUDUSD move from June the 1st when we’ve seen price move up over 1000 pips in slightly less than 3 months:

Or perhaps a trader was fortunate enough to catch the turn in EURUSD just before the financial collapse of 2008. That’s over 3600 pips in only 4 months. 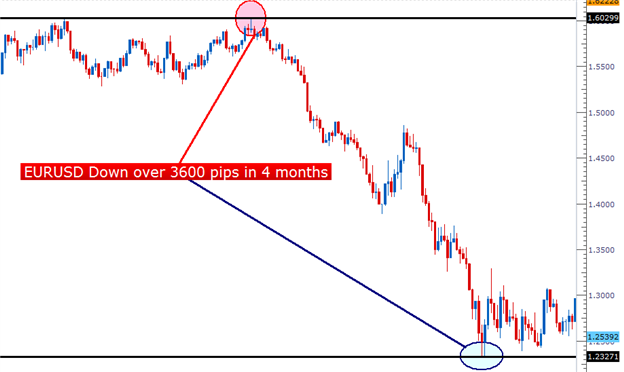 These are some big moves, without a doubt. But what isn’t readily visible from this chart (and nearly impossible to calculate) is the massive number of traders in between these two moves that tried and failed to catch these reversals.

New traders continue to get torn up attempting to catch these large price changes, attempting to buy ‘absolute bottoms,’ or sell ‘absolute tops.’ This article will attempt to prescribe a mannerism in which traders can look for price reversals while focusing on one of the more important elements of trading: Risk management.

Reversals can occur in a market for a number of reasons. Price can retreat from a given move at any point in time, but the chief culprit will always be the same: Supply and demand, which dictates price at all times in a true market environment.

If sellers outnumber buyers - then it can be said that there is more supply than demand. And just like that fashion accessory that went out of style last year, falling prices will often accompany an over-abundance of supply.

These changes to supply and demand can be initiated for a variety of reasons; but are often result of a fundamental catalyst in the marketplace such as an interest rate change, or a modification of trade policy in an effort to grow an economy. 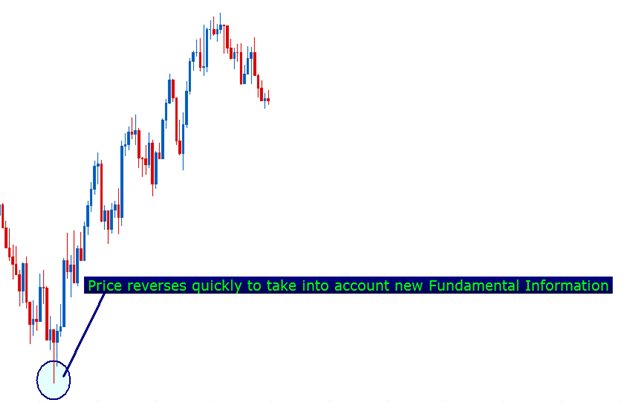 If an enacted policy appears to increase the economic activity of a country, traders - in anticipation that interest rates will eventually increase to reflect this additional activity - may look to buy a currency.

As new buyers continue to come into the market to buy the currency in anticipation of higher rates, demand continues increasing. At some point, if it hasn’t already, this demand will outstrip the available supply at the current price, and sellers (of which there would be less as this increased outlook foretells the potential for increased rates) command higher prices.

The cooperating forces of increasing demand with decreasing supply act as accelerant on a fire allowing for rapid price increases in a very short amount of time. These fires are often ignited by a fundamental catalyst, but to trade for reversals, you don’t necessarily have to trade news announcements.

How to Trade Reversals

First things first, trading for reversals is dangerous and risky. By their very nature, reversals are counter-trend trades. And if price reverts to its’ initial trend - traders may very well find themselves upside down in a position that they regret.

When trading for reversals, traders may even look at these trades as more risky than a trade in the direction of the trend. As such, they may look for an even larger profit target relative to their stop amount in an effort to offset this volatility. This isn’t dissimilar to the concept of looking for more aggressive risk-reward ratios in breakout strategies to offset the effect of false breakouts.

If a trader is expecting a lower winning percentage in their strategy, they can attempt to offset the fewer wins and additional losses by simply looking for bigger wins, and smaller losses.

If you are new to the FX market, and are interested in receiving a curriculum based on your specific trading background, you are cordially invited to take our ‘Trader IQ’ quiz. Upon taking the quiz, you will be directed to a curriculum list customized to your previous trading experience.