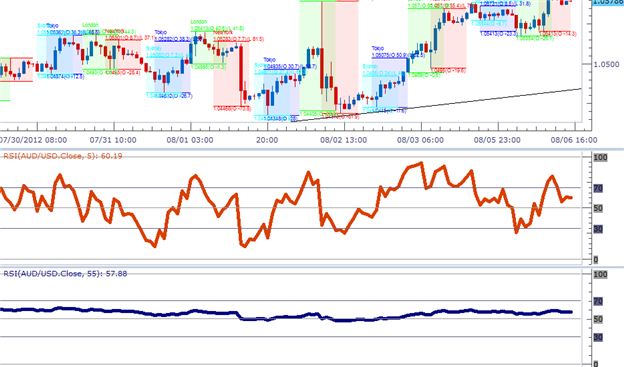 As traders further their education of Technical Analysis, they will often begin a journey on the path of indicators. On this path are many indicators, with many functions, uses and goals.

Some indicators may seem to work better than others depending on the trader’s goals; leading to the rampant popularity of many of the most popular indicators. However, something that must be made clear:

And since past prices can’t predict future price movements, what can a convoluted interpretation of those past movements (such as that of an indicator) do for a trader?

Well, while indicators will never be perfectly predictive of future price movements – they can certainly help traders build an approach based on probabilities in an effort to get what they want out of the market.

In this article, we are going to discuss one of the more popular indicators in Technical Analysis: RSI, or the Relative Strength Index.

What Goes into RSI?

The Relative Strength Index is going to measure price changes over the past X periods (with X being the input that you can enter into the indicator.)

If you set RSI of 5 periods, it will measure the strength of this candles price movement against the previous 4 (for a total of the last 5 periods). If you use RSI at 55 periods, you will be measuring this candles strength or weakness to the last 54 periods. The more periods you use, the ‘slower’ the indicator will appear to react to recent price changes.

The picture below will show 2 RSI indicators: The top RSI is set with 5 periods, and the bottom at 55 periods. Notice how much more erratic the 5 periods RSI is compared to the 55 periods. This is because the indicator is changing so much faster due to the fewer inputs used to calculate its value.

What can RSI tell us?

As an oscillator, RSI will read a value between one and 100, and will tell us how strong or weak price has been over the observed number of periods. If RSI is reading below 30, traders will often construe that to mean that price action has been weak, and the asset being charted may be ‘oversold.’

If RSI is reading above 70, then price action has been strong, and price may potentially be over-bought.

Because the indicator can show potentially over-bought or over-sold conditions, traders will often take this a step further to look for potential price reversals.

The most basic usage of RSI is looking to buy when price crosses up and over the 30 level, with the thought that price may be moving out of oversold territory with buying strength as price was previously taken too low. The picture below will illustrate further: 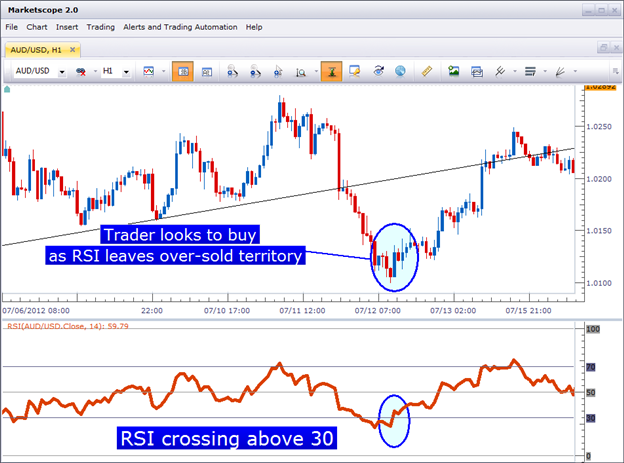 Pit-falls of Trading with RSI

Inherently, the Relative Strength Index presents a flaw to traders attempting to employ the basic usage of the indicator.

RSI, by its nature, looks for reversals in price. By buying when RSI crosses above 30 or ‘over-sold,’ traders are buying a market that has already been going down; inherently a counter-trend trade. And if a trader is selling as RSI crosses below 70, the market has been going up enough to be ‘over-bought’ and the trader is initiating a sell position.

If the market is ranging, this can be a desirable trait in an indicator, as traders can often look to initiate entries in a range with RSI. However, if the market is ranging, the results can be unfavorable as price continues moving in the trending direction, leaving traders that had opened trades in the opposite direction in a compromised position. The picture below will illustrate this situation further: 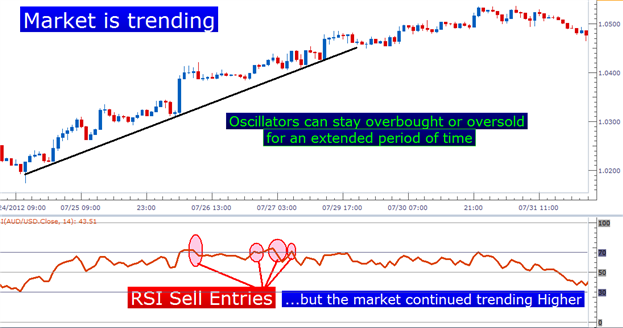 As you can see in the above graphic, price was trending up very heavily when four different RSI sell triggers occurred (all circled in red). Despite the fact that these sell triggers took place, price continued trending higher. If traders had opened short positions with these triggers, they would be in the precarious position of managing a losing trade.

Perhaps more troubling is the fact that some traders may not be using stops on their trading positions, and the trader looking to sell an over-bought market because RSI had moved below 70, may find significant trading losses as the strength that originally caused the indicator to read above 70 continues to carry prices higher.

When trading with RSI, risk management is of the upmost importance – as trends can develop from ranges, and prices can move against the trader for an extended period of time.

In our next article, we’ll look at how traders can attempt to off-set this pitfall of RSI when trading in trend strategies.