How to Build a Strategy, Part 3: Support and Resistance

Over this series of articles, we will walk traders through the multiple-step process of building a trading strategy. The first installment in the series discussed market conditions. The second looked at the available chart time frames. This is the third entry, in which we will investigate the mechanism of Support and Resistance.

Support and resistance have a recurring nature as a trader goes through the process of building a strategy. Because of its importance, it often behooves the trader build objective mannerisms for incorporating these prices into the strategy.

When strong support and resistance levels are found, this can enable traders to effectively plot their approach, manage trades, and adjust risk levels.

This article will discuss various mannerisms for identifying support or resistance so that traders can begin appropriately addressing this element of their strategy design.

Many traders consider price action to have special relevance when identifying support and resistance for one very compelling reason: The market has actually traded this asset at those specific levels.

For instance, if I observe that price has bounced off of .9956 on the AUDUSD currency pair, then I can confidently take forward that price had reflected off that level because once .9956 was hit, the number of sellers in the market outnumbered buyers; for any number of reasons.

The fact that price had reflected off of this level simply points out to us that the market resisted at .9956.

If we can find that a Fibonacci retracement level, or perhaps a pivot level were at that price then we can consider that level of resistance to have ‘confluence’ in that it can be considered resistance by multiple means.

As human beings, we think in round numbers. Odds are, if someone asked me how much I paid for my car I would use a round number.

As human beings, we innately value this simplicity. We automatically round figures up or down to save time. 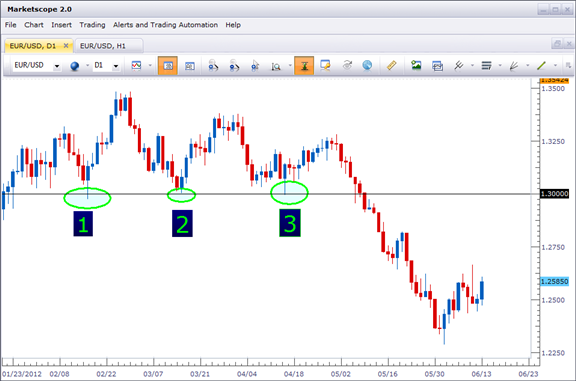 EURUSD playing with the 1.30 level/Created by James Stanley

And the stops or limits that get placed at these levels can most definitely affect order flow; meaning that if price is running up to a strong level of ‘whole-number resistance,’ enough stop orders can be triggered to more than off-set demand. This acts as a brick wall, stopping and reversing price - pushing lower. 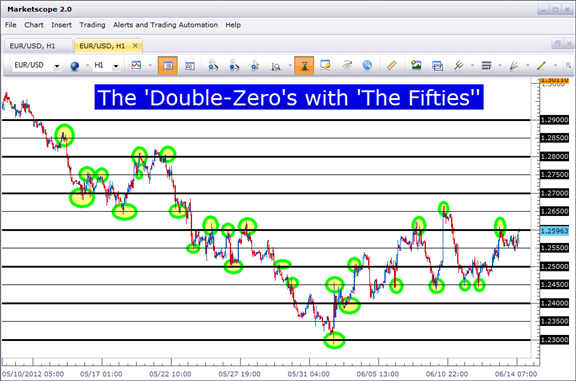 During uptrends, prices can often congest on the way up, resisting around whole numbers. And during downtrends, oftentimes, the same can be witnessed.

Perhaps no field has seen more ‘creative’ research in its usage in Technical Analysis than Fibonacci.

There are numerous flavors of Fibonacci studies, but for purposes of this article we will focus on the more popular, or Fibonacci retracements.

To plot a Fibonacci retracement, one needs only to observe a trend. Most charting packages have Fibonacci drawing tools readily available in which the trader can indicate the period to be analyzed. The tool will then draw levels at pre-determined intervals (intervals based on the Fibonacci mathematical sequence).

The price levels with which these intervals are drawn will often be thought of as support (in up-trends that are facing a retracement) as seen below.

Trend traders will often anticipate the original trend coming back into the equation; looking to enter the trade in the original trend-side direction as these prices get hit. So, in the case of a long-term downtrend, the trader can denote the trend on the chart as seen below. As price comes back to these levels while the downtrend is being re-traced, the trader can look to enter a trade in anticipation of the downtrend coming back into force.

This is only one way that Fibonacci levels can be traded, but the thing to keep in mind is that this is another way that traders identify support and resistance. Each trader will often have their own vantage point on Fibonacci; with many ardent zealots while others would prefer to use other mechanisms such as Price Action, or Pivot Points.

There are numerous mannerisms of identifying Pivot Points and this is an element of support and resistance that can be molded to the traders’ goals.

At its core, pivot points are merely calculations based on past price behavior that can provide an idea of potential support and resistance. 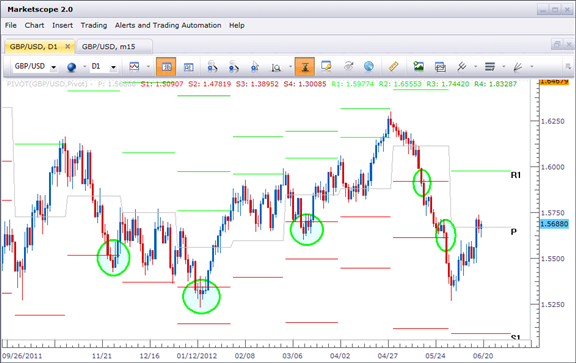 What is compelling about pivot points is how often they function as support and resistance despite these prices merely being products of a mathematical function.

For instance, the most popular form of pivot points is often considered to be ‘floor-trader pivots.’

To calculate floor trader pivots, you take the high, the low, and the close of the previous period and you divide them by 3. That’s it – it’s just the average of these three prices.

You can then multiply that by 2 – and then subtract the low of yesterday – and you arrive at the ‘R1’ pivot level.

To get ‘S1’ you can multiply the pivot price by 2 again, but this time we subtract the high from yesterday.

As a matter of fact, the name ‘floor-trader pivots’ comes from the time before computers stewarded exchanges when traders on the floor needed to be able to quickly calculate ‘ballpark’ areas of support or resistance.

Pivots can be calculated on any timeframe, but often – the longer the timeframe the more pertinent the level. The weekly pivot points are considered to be stronger support/resistance than the hourly, for instance.

There are also different flavors of these levels, such as Camarilla Pivots, which are often preferred by short-term traders as they use a different mathematical equation that often provides levels much closer to current price than floor-trader pivots.

Which element of support and resistance works best?

Well, it depends on your strategy. None of the aforementioned support and resistance levels have any predictive behavior. Each is simply a probability that we won’t be able to determine until the trade is over.

But these levels can help traders build their approach to work with those probabilities; looking to limit risk while maximizing gains. So the ‘meat’ of the strategy is still very much going to be based around risk management because of the single unifying fact that you will never know what the next candle on a chart will be.

How to Build a Strategy, Part 1: Market Conditions

How to Build a Strategy, Part 2: The Time Frames of Trading