The Fundamentals of the European Debt Crisis

Previous: Central Banking - A Study of Policy and Market Effects

For over 30 months traders around the world have cautiously watched the world’s largest continental economy flirt with disaster. Initially, each scare was met with action from the European Central Bank, an effort to ‘stem contagion,’ which is just a drawn-out way of saying they were trying to keep the infection from spreading.

As the Spanish economy continues to increase the rate at which their downward spiral is spinning, it’s becoming more and more obvious that efforts to ‘stem contagion’ have failed. The map below will show each economy in the Euro-zone with their relevant debt ratings. Countries whose bonds are considered ‘junk’ are in red, countries carrying a rating of A or higher in a various shade of purple.

The lighter shades of purple indicator weaker bond ratings, many of which are the result of downgrades brought upon by exposure to the European Debt Crisis. 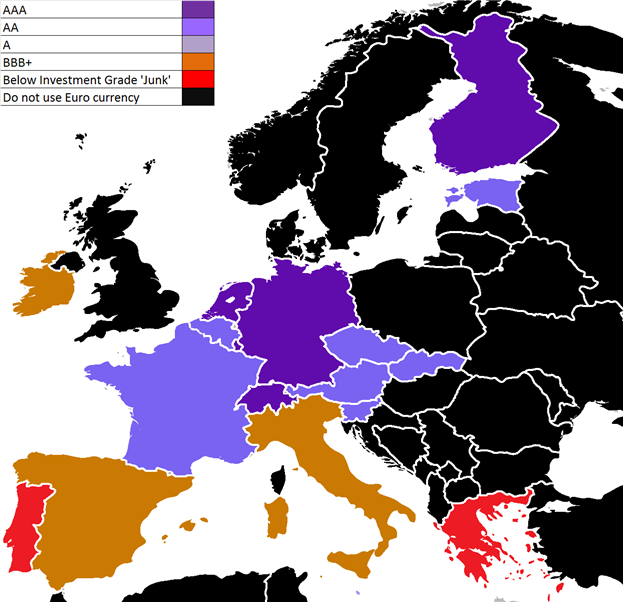 Euro-zone with each country colored by debt rating; prepared by James Stanley

Notice that countries in ‘orange’ are carrying a BBB+ rating, which is just one notch before they are considered ‘junk’ as well. What’s scary is that the world’s 8th and 12th largest economies, which are the 3rd and 4th largest in Europe (Spain and Italy respectively) are colored in orange.

Key note on the above graphic – Switzerland is included as a AAA country despite the fact that they do not use the Euro. I’ve included Switzerland because the Swiss National Bank has set a ‘floor’ for the EURCHF currency pair at 1.20, and in many ways this has tied their fate to that of the European Union.

Voters in the eye of the storm, Greece, as well as voters in Europe’s second largest economy of France spoke loudly in the beginning of May, electing new officials that promised a new stance on the debt situation; yet, almost a month later, a long-term fix continues to remain elusive.

This article will attempt to answer some very important questions: Why is this problem continuing to get worse? What could economic policy makers do to fix the problem(s)? And maybe more importantly: How can investors and traders protect themselves during these turbulent times.

Why is the European Debt Crisis getting worse?

A simple answer to this problem is fragmentation. The various economies within the Euro-zone are so different that a common application of monetary policy could create additional problems.

Imagine this: You and your closest 16 friends all have a cough, and when you and your 16 friends go to the doctor – you are told that only one of you needs to be examined.

The doctor will then take the results of that examination, and blindly apply the remedy to the other 16.

This doesn’t sound like a good idea, does it?

Some of your friends may have the common cold, but others may have the flu; while others have something potentially more serious like bronchitis, or maybe even worse. And a uniform treatment may only make help a few of your sick friends without treating the others.

When times are good, and when you and your 16 friends are healthy – nobody notices the deficiency of such a system. But when infection sets in a host, and that infection begins to spread – that’s where the problem becomes prominent.

While Europe grew at a favorable pace before the 2008 Financial Collapse, the ensuing recovery exposed potential infections in Greece, Portugal, Ireland, Italy and Spain, with Greece being the most problematic (the most sick of the 17 friends). 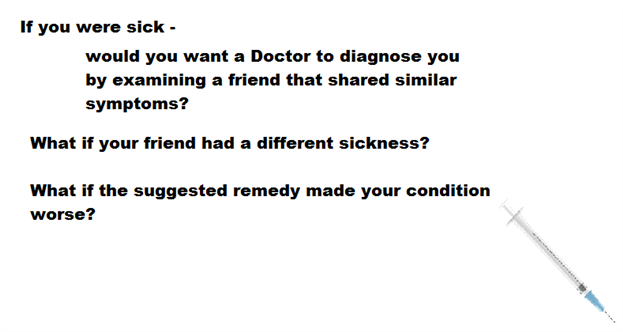 That’s where we’re at in Europe right now. Infection is setting in. Blanket remedies have not worked.

The European Central Bank attempted to initially diagnose the problems with demands for each government to spend less, commonly known as ‘austerity.’ By many accounts, this attempt to spend less only exacerbated the problems being seen in countries like Spain and Italy.

With the governments not spending as much as before, their respective economies only began contracting faster. The bad loans on the books of banks in these countries have only grown larger. Sovereign yields have gone up, and it is now more expensive for these nations to borrow capital.

In many ways, austerity has created a self-perpetuating problem in these economies.

What could policy makers do to ‘fix’ the problem?

Unfortunately there are no guarantees here, as the sickness has been left unattended for quite a while. The European Central Bank took a route which, at this point, has only made the problems throughout Europe worse.

As you can see from the table below, depending on where you are in Europe, you may have very different opinions on how to answer this question:

This is one of the reasons that a ‘fix’ to the problem has been so evasive; the same fragmentation that we looked at above. Germany, by many accounts, has prospered since the introduction of the Euro. The Netherlands have retained their AAA credit rating despite a government step-down after a failure to agree upon their own austerity terms.

Structurally, the European Union has some very real risks. When economies are weak in areas like Spain, Portugal, or Greece – these economies have lost the ability to off-set that weakness by devaluing their currency units. The Euro has been kept strong by the strong economies of places like Germany and Finland.

The current idea that is growing in popularity, particularly with the newly elected Francois Hollande from France, is the idea of ‘Eurobonds,’ which is actually somewhat of a misnomer. The proper definition of Euro-bonds is simply a bond denominated in a non-native currency (also known as an ‘external bond’). The concept of ‘Eurobonds’ that is being proposed as a fix to the European Debt Crisis are instruments that would be issued by the European Central Bank, thereby exposing the high-credit economies above to the credit risks of the lower-credit-quality nations.

As you can imagine, economies like Germany haven’t seemed too bullish on the idea, and that’s why we’ve seen so much volatility in pairs like the EURUSD and EURJPY.

However, an agreement to issue bonds from the European Central Bank – essentially giving power to the ECB to print new Euro’s, could potentially offer a ‘fix’ to the problem. Whether this would be a long-term solution or a short-term fix remains to be seen. But it would almost assuredly solve the short-term debt issues being seen in Europe.

What Can Traders Do To Protect Themselves?

The good news about these situations is that there is quite a bit of profit opportunity for traders and investors. Big news brings big moves, and to the astute trader – that can be valuable.

The thing to keep in mind is that despite the fact that price may offer clean, strong, smooth trends – nothing is guaranteed. As a matter of fact, the case can be made that trading in these strong-trending conditions can be even more difficult than if the trend was less strong.

After price moves up quickly, there is the constant fear of ‘catching a top,’ as price reverses against us shortly after we have opened our trade.

Below is a list of 5 ways that traders can protect themselves when trading in these environments:

NEXT: Stock Market and FX Correlations