In the first part of our series we learned how United States Treasury Debt began to become accepted as the safest investments in the world.

In the second installment, we looked at the pricing and structure of the Treasury Debt market to learn how government debt affects Forex traders.

In this article, we are going to put this knowledge to work, learning how capital flows can affect currency exchange prices; and how we, as traders, might be able to use this to our advantage.

Bond investors will pay higher prices for higher degrees of safety. And this makes sense because, after all, when investing in bonds (also known as ‘fixed-income) one is often doing so for the safety of the investment – not the return.

The longer the bond has to maturity, the less relative safety it is perceived to have. Investors will often look at a 6 month Treasury bill as carrying considerably less risk than a 30 year Treasury Bond. A lot can happen in 30 years; and although the US government is anticipated to play a large role of the economy in 30 years: its exact role is uncertain, as are a litany of other factors.

Bond investors don’t like uncertainty. This is reflected in the ‘Yield Curve,’ which is a graphical representation of rates at an approximate maturity. In most cases, the higher the maturity, the higher the rate. This is a ‘normal’ yield curve, and this is what most investors expect to see in the Treasury debt market. 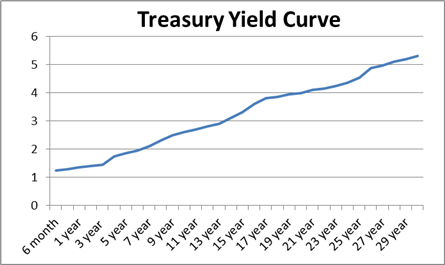 When investors around the world are concerned about economic growth, they will often place a higher value on the safety of their invested principal. Think about it for a moment –

What does a 10% return on investment produce if you’ve lost 15% of your principal?

This produces a negative return, right?

Well, if an investor is anticipating that this may happen – they have the option to put their money in an investment that will, likely, not lose any of the principal if held to maturity. We examined this in The History of US Debt, as the Treasury bill is considered the ‘risk-free rate of return.’ 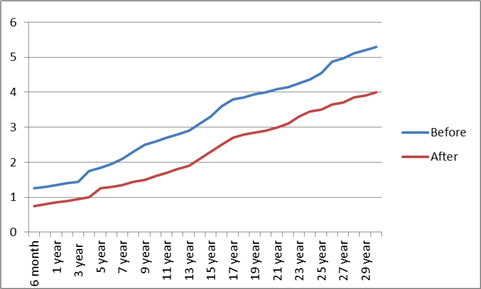 Treasury Yield Curve before and after a ‘flight-to-quality’

The red line on the above chart shows where yields moved during a ‘risk-off’ market, as treasury prices were pushed higher (and yields lower) at all relevant maturities.

While investors can potentially profit by buying treasuries before a ‘flight-to-quality’ and selling them after prices have moved higher – there are quite a few other ways to speculate on these moves. Investors in the Forex market have access to vast amounts of leverage that can potentially turn one of these events into a very profitable endeavor (or potentially a losing endeavor depending on whether the trader was on the right or wrong side of the move).

How to Play Risk-Off in the Forex Market

The first thing that needs to be learned by traders and investors looking to profit during these bearish times is the fact that when US Treasuries are purchased, the transaction is performed in US Dollars.

If a Hedge Fund Manager in Berlin wants to buy Treasuries, they need US Dollars to do so.

As Treasury prices are increasing during ‘flights-to-quality,’ we’ll also often see a rise in the price of the US Dollar (since investors are exchanging into US Dollars to buy Treasuries).

For example, during the Financial Collapse of 2008 – in which the United States was mired in an almost literal collapse of the financial system – investors flocked to Treasuries, and further, the US Dollar at a breakneck pace.

The chart below shows the rise in the US Dollar (and fall of British Pounds) sparked by the 2008 Financial Collapse: 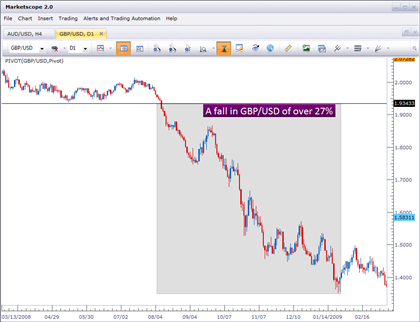 As the 2008 Financial Collapse circulated across the globe, the chart above shows us that investors sold British Pounds for US Dollars to the tune of a 27% move.

This in-and-of-itself might not be all that exciting, but when you consider the fact that traders and investors could have leveraged this situation up to 50 times their equity (or perhaps even greater leverage depending on where one lived and what leverage was allowed); we begin to see how these ‘risk-off’ movements can potentially be very profitable.

Let’s look at a few other currencies performance during the 2008 Financial Collapse: 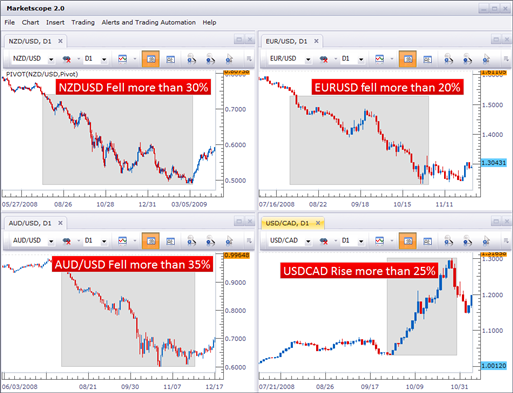 Major Currencies against the US Dollar during 2008 Financial Collapse

And once again, these moves can be magnified significantly with the usage of leverage. We always advise traders to control their leverage, and we found that a level of 5-to-1 may be preferable for most traders in the FX Market in our Traits of Successful Traders series.

But even leveraging these moves by a factor of 5-to-1 could have doubled a trader’s account! If the EURUSD move above was leveraged 5 times, the trader could have seen a 100% return on the trade to double their investment (you can multiply the percentage of the move by the leverage factor to find the investors return.) Keep in mind – leverage is a double-edged sword that could also deplete funds from traders’ accounts.

Investors looking to play risk-off moves in the Forex market can look to do so buying US Dollars.

As increased worry and panic permeates the financial markets, we could see investors eschewing higher rates of return to buy one of the safest investments on the planet: US Treasuries. As investors and capital flow into Treasuries (and out of other investments), one could expect the Yield curve to fall (remember, as prices increase – yields decrease): And as the yield curve is falling, the US Dollar is usually strengthening against many of the world’s major currencies (because investors need US Dollars to buy Treasuries).

And leverage – well, leverage allows the FX Trader to see MASSIVE changes in account equity during these tumultuous times; when the rest of the world is running for cover attempting to shield from the pervasive losses of equity markets across the world – the Forex Trader can potentially profit (or lose) very large amounts of money very quickly.

This is why Forex is one of the best markets in the world for Active Traders and Passive Investors alike: With a 2-sided currency quote, in which you can generally buy just as easily as you can sell, a bear market is merely a frame-of-mind. When it looks as though the economy is headed for a downturn, as we saw in 2008 with the Financial Collapse, or 2011 with the European Debt Crisis – FX Traders can look to ‘go long’ US Dollars by shorting the EURUSD, or GBPUSD pairs.

Treasuries Part 1 – A History of US Debt

Treasuries Part 2 – How & Why Treasuries Matter to FX Traders