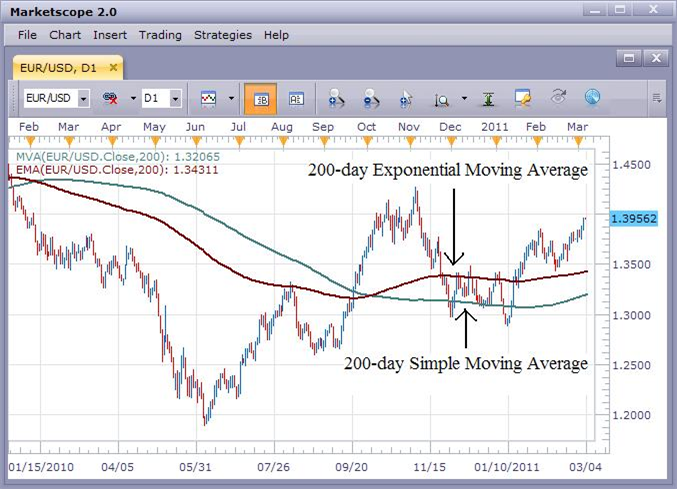 This is the type of question I get every week from new traders who have found all of these new tools at their disposal and start the process of finding the best ones for them. Below is a daily chart of the EUR/USD with a 200-day SMA (green line) and a 200-day EMA (red line) plotted. You can see that in the graphic there is little difference between the two. Normally, the EMA will change sooner than the SMA because it emphasizes the recent activity more than the older activity. But in this case there really is not much of a difference. New traders will play with both to find out which one is better and use that one in their trading approach. But the reality is that it is unlikely that one moving average will give you winning results if the other does not. If you find that a switch from a SMA to an EMA turns a losing strategy into a winning strategy, it is probably your strategy that needs changing instead of the moving average. There is just not enough difference in the two to have that much of an impact in the results of a certain strategy. The 200-day SMA is popular for identifying the trend. If the market is above the 200-day SMA, the trend is considered to be up and if the market is below the SMA, the trend is considered down. Short-term traders have made the 10-day EMA popular based on its use by some famous traders. But the only judge to what type of moving average to use is your account balance from month to month. If it helps your trading, then keep it and if it does not help your trading, then look to replace it.