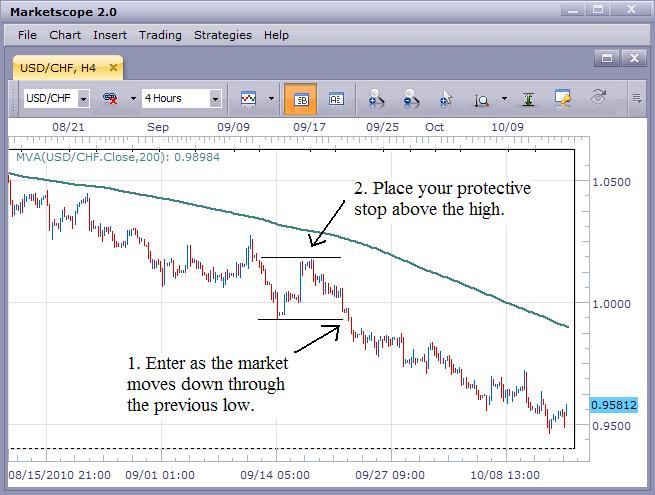 Know Your Exit Point Before Opening a New Trade

Many traders enter into a new trade without a solid exit strategy. Problems arise when the market starts moving and the decision to exit is determined by the emotions of the trader rather than solid analysis. Experienced traders understand this and have an exit strategy mapped out before they get into the trade. This is the best way to keep your emotions out of the decision making process of trading. Decisions made by fear and greed are not only inconsistent, but many times seem to lead to an exit at the worst possible moment. A better idea is to determine when you intend to exit before you enter into the trade. This 4-hour chart of the USD/CHF shows a strong downtrend as the market is consistently below the 200-period Simple Moving Average also plotted on the chart. Since the trend is down, we are looking for selling opportunities instead of buys in an attempt to take advantage of that momentum. One strategy is entering on the breakouts, which means to sell as the market moves down through a previous low. The thought is that many traders will be selling there which increases the chance of more selling pressure. Many of those same traders will place their protective buy stop above the high before the breakout as noted on the chart. They do this at entry so they are protected from a big move against their trade. This decision is based on technical analysis rather than emotions and that is always a better choice. Many of these same traders will also use a simple 1:2 risk:reward ratio to determine their exit with a profit. If you risk 100 pips on the trade, simply look for 200 pips in profit and set that order at entry also. Now you are set with the main decisions a trader makes on each trade, the entry and the exit. In the DailyFX+ Trading Course, we also offer a trade management approach which includes moving the stop to breakeven if/when the market moves halfway to the target. So on a move of 100 pips towards your target, you move your stop to your entry price which means you can breakeven or profit on the trade. That is solid trading and puts you in a position to be consistent in your approach which is by far the best way to realize consistent results.