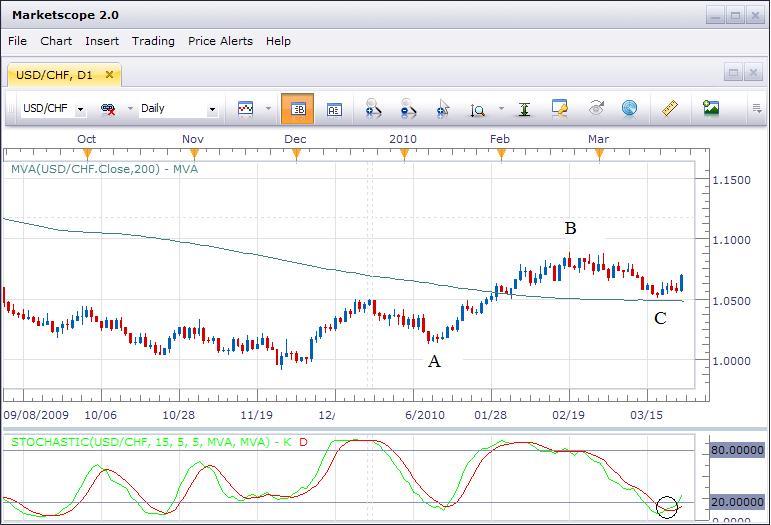 We can see where the market moved up through the 200-day Simple Moving Average and on the pullback off of the high, found support at the same level. We can also see the classic ABC move on this chart. Point A being the low with Point B being the high of the trending move. Point C is basically where we would start looking for the buy and a reversal back to the direction of the trend. But this is obviously a little tricky as we really don't know where Point C is until the market actually moves back up through Point B. Until that happens, it is strictly speculation. Breakout traders will simply wait for that move up through Point B to buy and place their protective sell stop below Point C. They are more comfortable waiting for confirmation of the reversal before entering into the trade. Their risk may be higher than those traders who may have entered at Point C, but they prefer the higher winning percentage that the breakout can offer. Traders who try to identify Point C before that breakout will use just about any tool they can find to get an earlier entry. This is where the use of technical indicators can be of great value. I also have Slow Stochastics with values of 15,5,5 plotted on this chart. The buy is the crossover after the indicator has moved below 20. This gets you into a buy before the breakout and protective stop placement below Point C works out to less risk on the trade. However, even when using indicators is this situation, you are still likely to see a lower win percentage than waiting for the actual breakout. So breakout traders take on more risk for a higher win percentage while traders who buy at the pullback limit their risk for a lower win percentage. One is not better than the other and is really a matter of personal preference to which approach you use. But the keys are still to trade with the trend and to always identify and place your protective stop in the market upon entry.