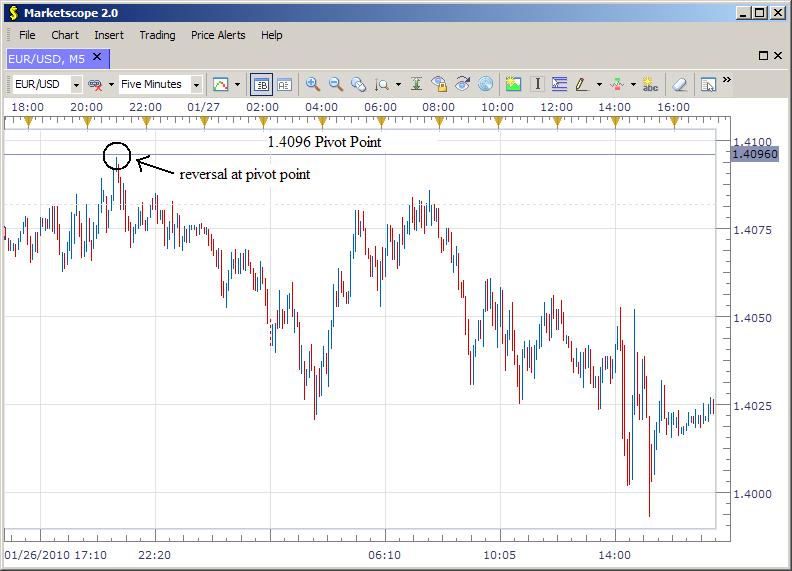 We have to keep in mind that even though this was before the use of computers that could calculate a technical indicator instantly, these pit traders could not bring a computer into the pit even if it would have been available at the time.  But even after computers became a big part of trading, Pivot Points were still used after many traders realized that technical indicators were not that reliable on the short time frame charts while the use support and resistance levels offered a better chance of success on those short-term trades. One problem though, the pit traders did not have access to the support and resistace levels that were formed during the current trading session since they were in the pits filling orders.  So they needed to have some sort of reference point that could serve as potential support and resistance that they could write down on one of their trading cards they had with them in the pits and they had to have these levels before today's session opened.  The solution was to use the high, low and closing prices from the previous day to use for today's trading....and Pivot Points were created.

There have been many formulas created and offered on the internet that have been called Pivot Points and we will introduce some of those in future lessons, but today we want to start with the most basic formula that is still used today so we can understand the concept of Pivot Points and how they are used.

On January 26th the high, low and closing prices for the EUR/USD was as follows:

The formula for calculating the Pivot Point is to simply add these three price levels and divide by three.

We can see that the market opened below the 1.4096 Pivot Point, which was bearish and moved up to test the Pivot Point.  There was resistance which may have offered day traders a good sell entry, especially when you consider the fact that the market did not move up above the Pivot Point during the entire January 27th trading day.  This is a basic look at this tool but a good place to start for today.  If you do not feel like calculating the daily Pivot Point yourself, no worries, as the team at DailyFX will do that for you and can be found at this link.

Next week we will take a closer look at this popular and valuable technical tool.