The AUD/USD is trading into key values of support, as the pair has fallen as much as 199 pips from the standing yearly high at .7741. This decline has come mostly on the back of recent US Dollar strength, and now the market is waiting for Fed Chair Janet Yell to make her most recent statements in Chicago later today.

Technically the AUD/USD is trending lower in the short term, trading well below its 10 day EMA (exponential moving average), found at .7634. This short term decline in price has now pushed the pair to test the 200 Day MVA (Simple Moving Average), found at .7546. This line should be considered as a critical line of support, and a breakout below this point may suggest a shift in the AUD/USD’s long term trend. If prices fail to breakout however, it may suggest that this most recent decline has been a retracement in an ongoing 2017 uptrend. 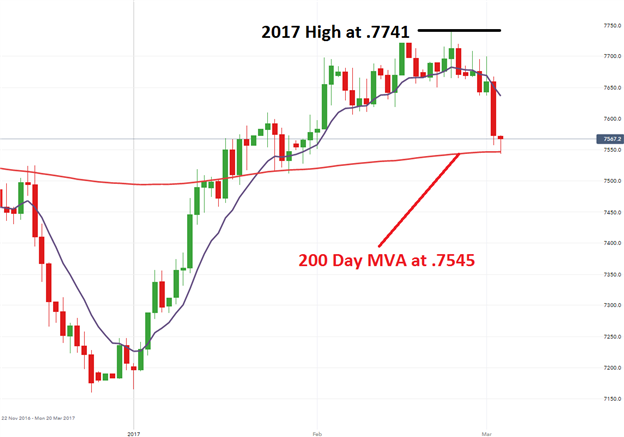 Intraday market analysis has the AUD/USD trading below its central pivot, found at .7599. Typically this is seen as bearish, and if the pair continues to decline next support may be found at the S1 pivot at .7530. A move to this point should be seen as significant as the AUD/USD would then be trading back below the previously mentioned 200 day MVA.

Alternatively in the event that prices remains supported, reversal traders may look for price to first break above today’s central pivot. From this point, values of resistance include both the R1 and R2 pivots found at .7640 and .7709 respectively. A move to .7709 should specifically be seen as significant, as it would have the AUD/USD trading back above its 10 day EMA. This would suggest a shift in short term momentum, pack in the direction of the pair’s primary trend. 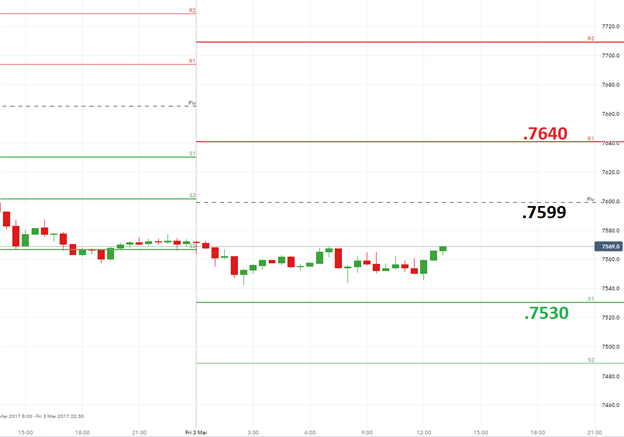