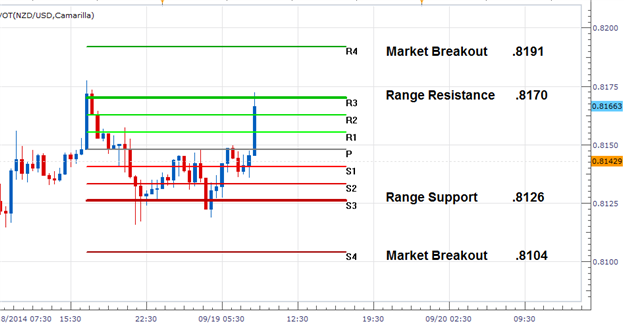 The NZDUSD opens the final U.S session of the trading week hovering near range resistance. The R3 pivot seen above, comprises the upper boundary of today’s range at a price of .8170. Support is seen below on the graph at the S3 pivot at a price of .8126. Price has already traversed the now identified 54 pip trading range twice today. In the event that price continues to trade between these points, range reversal traders may continue to look for new trading opportunities.

In the event that momentum carries price action to either the S4 or R4 pivot, the NZDUSD would be considered a candidate for breakout trading. A move above R4 at .8191 would signal increased bullish momentum on the creation of a higher high. Conversely a drop below S4 support, at .8104, raises the question of price returning back in the direction of its daily trend. In either scenario, a breakout would suggest a change in market conditions and any range trading opportunities should be concluded.

Yesterday all eyes were on the GBPUSD as voters took to the polls for the now concluded Scottish independence referendum. Price action was already moving on daily highs, and breakout traders were preparing to take advantage of fresh bullish momentum. To learn more, check out yesterday’s FX Reversal article linked below.