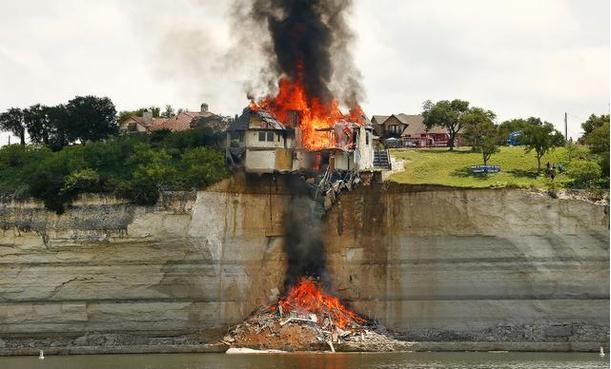 How to Scale-In and Scale-Out of Trades

We spend a lot of time as traders figuring out the best time to get in to and get out of trades, but I'd argue that how we get into trades is just as important. Today we look at scaling in and scaling out of positions, and how it can benefit your current trading strategy.

Why Do Traders Scale-In and Scale-Out?

There are many reasons why profitable traders turn to scaling into a position over time. More advanced reasons include to reduce the amount of slippage received when opening a large trade or to hide a large position that you don't want others to know about. But, the most important reason why traders scale into a trade is to enhance their gains on a trade that has already begun to show promise.

It is very obvious that larger trade sizes will result in larger profits when the trade moves in our favor. That makes complete sense. But when we have the ability to start off our trade with a smaller trade size and only add to a trade when its winning, we are able to start off our trade by risking a little and end our trade with the chance to make a lot. So not only to do we enhance our profit potential, we can also reduce our risk by starting with a smaller trade. Only adding to the trade after its profitable.

Scaling out of the trade is a similar idea to scaling in, but in reverse. Rather than letting a trade hit a profit target and close out the entire position, we instead partially close the trade, and let the rest have the opportunity to move further into profitable territory. This secures a profit but also leaves the door open for further gains. It is also common to move your stop loss to break even or beyond when an initial profit target is hit. That way the remaining position you have open is almost "risk-free."

What Type of Trades Can This Method Be Used?

So now that we understand the benefits of scaling in and scaling out of trades, in what situations should we consider it? Well, for starters, we should only look to add to positions that are in profitable territory. We don't want to throw good money after bad if the trade is already proving us wrong. It's best to cut losers short, lest we add fuel to the fire.

We also only want to scale out of positions only when they are profitable as well. There is no reason (other than hope) to partially close out a trade once its proven us wrong. So rather than setting a single profit target for the entire trade, we can set 2 or 3. It's also possible to leave a part of our trade open without a limit at all, and letting an indicator or a trailing stop decide when it should be closed.

Where Do We Add-To or Partially Close Trades?

Using this method is actually much easier than many traders try to make it. The way I look at scaling in is the same way I would look at opening up a single trade, but locating several times where opening up a trade is warranted. Stay away from setting "blind" entries 50, 100, or 200 pips away from our original entry. We want to have just as much reason to add to a trade as we did when we initially opened it.

Take the simple CCI strategy below where we decided to take a buy trade when CCI crossed above -100. This is a classic trade that found itself in a pretty tight range for the next 20-25 bars. There were times when price ran up in our favor; but never a definitive price move that would catch the attention of AUD/USD bulls, until the range was broken and price closed above resistance. This breakout would justify buying the Aussie in its own right. But since we already had a trade, we can simply add to our existing trade.

After we added to our position, we witnessed another "top" creating another resistance level. When the AUD/USD broke this 2nd resistance level, that was another time where we could add to this trade. So it isn't anything too difficult. We just look for opportunities where buy trades look good, and allow those entries to add to our existing trade. 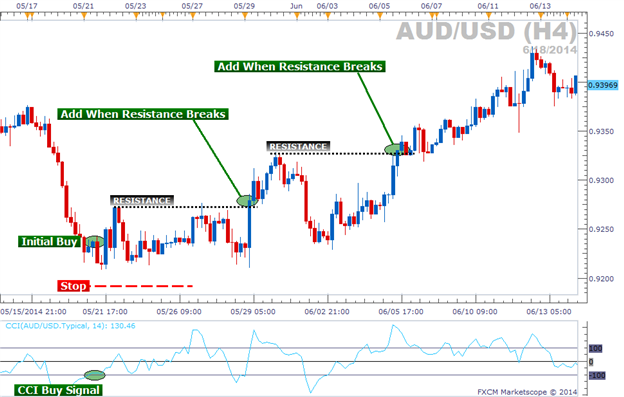 As for scaling out, we want to use the same method as we would normally use to exit trades, but pick multiple levels that fit that criteria. So for the chart below, we can see that we bought on an initial break of a previous high. We then targeted a profit just below the next potential resistance level and then targeted an exit just below the resistance level after that. So rather than taking a quick profit on our entire trade at the first resistance level, we were able to let part of the trade run and obtain greater profits. 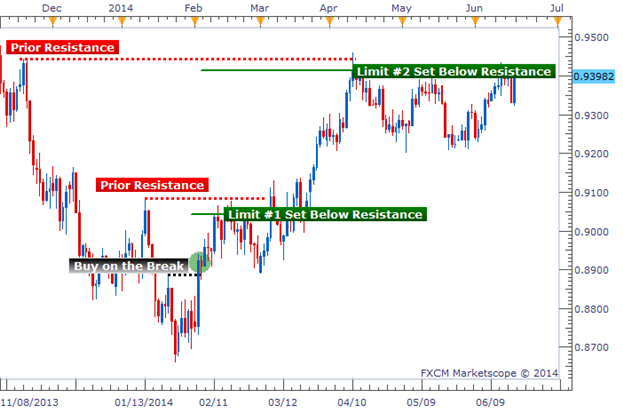 So we understand that our strategies' trading logic is important, but so is how we enter and exit our trades. Scaling in and scaling out can enhance our gains but also at times reduce our risk. Using the methods above can improve your strategy, but remember to perform your own due diligence before placing any trades on your own account. Also, feel free to utilize a demo account to practice trading risk-free before trading with real money.

Ever wanted a platform that will automatically place trades on your account 24 hours a day? Check out FXCM’s Mirror Trader Platform!