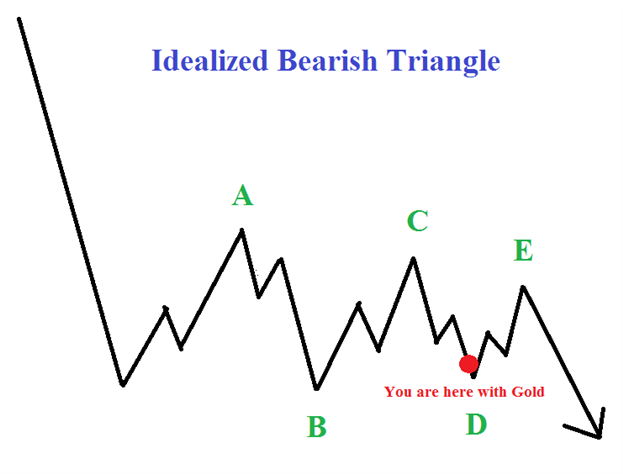 Gold appears to be consolidating in a sideways triangle for the past 12 months. This is a big consolidation pattern that offers some trading opportunities inside the triangle.

Look for the yellow metal to find support over the next several days and a potential $100 rise in the price of the gold.

The Anatomy of a Triangle

Triangles are consolidation patterns that allow prices to trade sideways in an effort to alleviate overbought and oversold pressures. In the case of gold, it has been working its way lower for the past three years and needs to consolidate those losses, which it has been doing in the triangle pattern.

Elliott Wave triangles are made up of five waves inside the triangle with each wave being contained inside the previous wave. In the idealized example above, notice how wave ‘B’ ends BEFORE the beginning of wave ‘A’. Notice how wave ‘C’ ends BEFORE the beginning of wave ‘B’. This continues until prices squeeze together in five waves (A-B-C-D-E) then they eventually explode.

In the same idealized example above, it appears gold is closing in on the end of the ‘D’ wave which should yield a bounce higher in wave ‘E’. 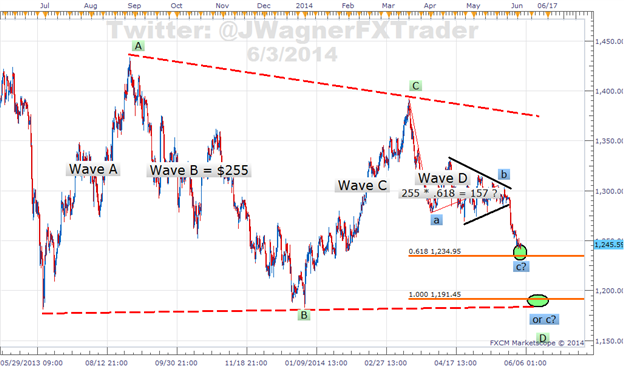 Here is the actually price chart of goal with the green triangle labels. There are two wave relationships that point towards the end of the ‘D’ wave ending near $1235 per ounce. Both wave relationships are expressed through alternating waves having a fibonacci relationship in length.

So we have two different alternating waves pointing to the same price target. This means there will likely be a reaction higher near $1235. If $1235 does fail, look to $1190-$1200 providing significant support.

The price target to the upside in this scenario would be $1340-$1390. So there is enough room to the upside to position towards the long side of the trade.

Try out this trading strategy in a demo account. For residents outside of the United States, enroll in a free practice account and trade Gold in the same account as currencies. Click HERE to get started.

Add me to your Forex circle on Google Plus. By following Jeremy on Google Plus, you will receive chart diagrams with greater explanation. Additionally, you can ask Jeremy questions or comment on this gold trade, forex charts, technical analysis, or trading in general.