Trading Around News – How to Manage Positions

Because my strategies revolve around technical analysis and sentiment, I am often asked what I do around news releases. Specifically, how I manage positions around major news releases that are likely to move the market. The truth is that it depends on why I opened the trade in the first place, and whether it is a short-term or long-term trade. Let's explore trading around news events.

There’s no doubt that trading around news is exciting. It’s where we see the most volatility and the largest swings in our accounts’ equity. But as any news trader can attest, this type of volatility is a double edged sword. For any profit earned off of a news release, there was the possibility of a loss of equal size had the trade gone against us.

This is why you often hear me say “It’s a coin flip” when talking about having a position when an economic news release is announced. No one knows whether released data will be positive/negative or bullish/bearish. The only thing we know about economic data is when it will be released.

The image above shows DailyFX’s Economic Calendar. It keeps traders informed on when each event is scheduled and will tell us whether it is a low, medium or high importance news event. We want to make sure we keep an eye on events for countries which we hold currency in. So if we were trading EURAUD, we would want to follow all Euro-zone news as well as Australian news. Now that we know when the news events occur, how should these affect our open positions?

When to Leave Trades Open During the News

There are two primary reasons why a person should leave a trade open during a major news event.

The first reason is an obvious one but is worth mentioning. If our trade is based on fundamentals, we should leave it open to face fundamental news events. After all, that should be a large portion of our trading edge when it comes to fundamental trading. In the short term, positions can face large swings, but in the long run, price should move in our favor if we are correct on our fundamental analysis.

The second reason for leaving a trade open during news is if we are in a long term position; defined by a trade we plan on holding for longer than two weeks. We are looking at a longer period of time with a stop loss wide enough to endure sudden fluctuations caused by news events. It's likely the price will not move far enough to stop us out, so the trade may still play out as planned.

And even if we come across a time when a news event moves price far enough to stop out a longer term trade, we must remember that news is a coin flip. It can just as likely hit our limit as it can our stop. So in the long run, we want to keep our long term trades open during the news.

When to Close Trades During the News

But what about the trades that we should consider closing around news events? In my opinion, we should look to close out short term trades if either their stop or their limit is set within the Daily ATR (14), also known as the Average True Range. ATR tells us the average range from high price to lose price over the last 14 trading days. This gives us indication on how far we can expect the currency pair to move on a normal day.

If we are placing a trade with a stop or limit within the Daily ATR(14), we should consider closing out the trade before a High Importance news event is released. This is because price can move violently in either direction rendering your technical analysis void. It's highly likely that the news event will turn your technical trading edge into a 50/50 coin flip. It takes a perfectly formulated strategy and turns it into a roulette wheel. 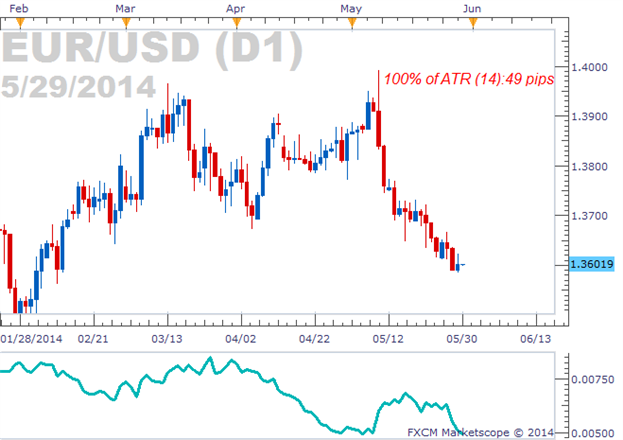 For an easier way to read the Daily ATR(14), check out FXCM Apps' ATR Pips indicator. It's free to download and clearly displays the ATR in pips. In the image above, the EURUSD had an ATR(14) of 49 pips. So if our strategy involved a stop or limit that was less than 49 pips, we might look to close out the trade before a high importance news event.

Hot Off the Press

Fundamental news events can both be great for a position or absolutely horrible, so it's important to see if our strategy can sustain whatever the news brings. If our trades are long term or fundamentally driven, we should make it in the long run if we have an edge. If we are trading short term however, it might be best to run to cover and close out the trade. Why put in the time and effort just to flip a coin?

Sign up for my email list to stay up to date with my latest articles and videos.