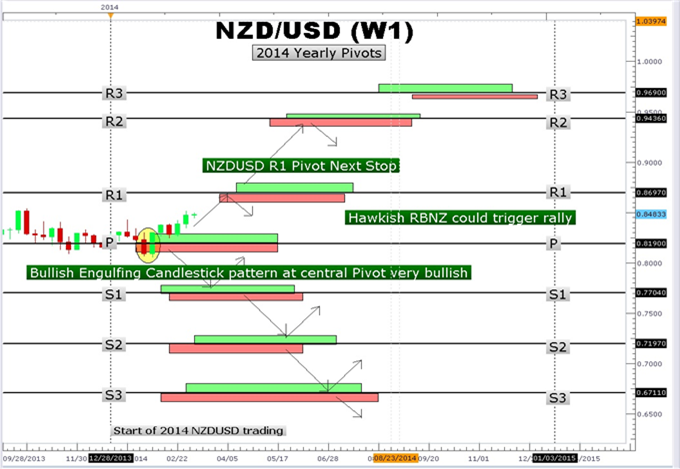 In the previous NZDUSD yearly pivot article, we observed how Kiwi price action would behave in relation to the 2014 yearly pivots. We observed how price can rebound sharply from contact with these long-term price levels. Since yearly pivots are based on the previous year’s high, low and closing price, these levels are a lot tougher for price to penetrate the first time because of the time frame used. The longer the time frame, the more reliable support and resistance becomes. The article also pointed out that NZDUSD would more than likely hit the 0.8697 levels in the weeks ahead because price was rejected.

While picking tops can be losing proposition, NZDUSD longs may want to consider tightening stops, or reducing position size as price stalls at the yearly R1 pivot to protect profits. As seen in the chart above, we see price bouncing strongly from the central pivot and then continued higher after the RBNZ rate hike.

Other longs may seek to book gains as well ahead of the US NFP employment number. The beginning of a new month and a new quarter could make holders slightly wary. I’d like to invite you to make a trade based on NZDUSD yearly pivots using a free FXCM demo account. You may want to buy a breakout above the yearly R1 pivot or enter short given a reversal at the 0.8697 R1 yearly pivot. 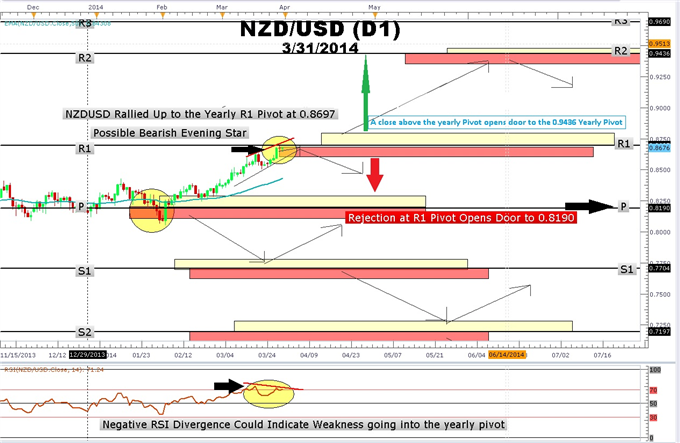 The daily chart above shows NZDUSD pushing against the yearly pivot. If the trend continues and NZDUSD can close on a sustained basis above 0.8700, then the door to the R2 yearly pivot at 0.9436 is wide open. A couple of things NZDUSD bulls need to also consider as possible early warning signs that a reversal may be near at the yearly R1 pivot.

By the end of the day today, we will have confirmation that either it is or it isn’t a bearish evening star candlestick pattern.If the yearly R1 area pivot holds as significant area of resistance, we could see a correction back to 0.8500 which is roughly the midpoint the central pivot to R1 range.