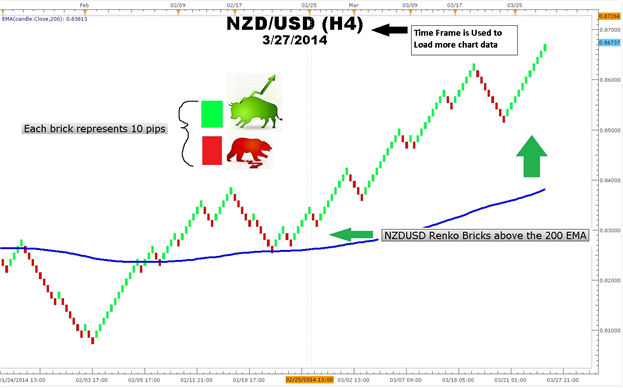 The 3 Step EMA and Renko Strategy for Trading Trends

Developed in the 18th century in Japan to trade rice, Renko charting is a trend following technique. It is excellent for filtering out price “noise” so traders can catch a major part a given Forex trend. It was believed that the name “Renko” originated from the Japanese word ‘renga’ meaning ‘brick’.

Similar to Kagi and Point and Figure charting, Renko ignores the element of time used on candlesticks, bar charts, and line charts. Instead, Renko focuses on sustained price movement of a preset amount of pips.

For example, a trader can set the bricks for as little as 5 pips or as many as 100 or more. A new brick will not be formed until price has moved 100 pips. It could take 24 hours for a new brick to form or it could take just a few hours. However, no bricks will form until the preset limit is achieved.

As you can see in the NZDUSD Renko chart above, each brick represents 10 pips of price movement. A 4-hour chart is used to actually load enough price data to be able to identify the direction of the trend.

Green colored bricks are bullish, while red-colored bricks are bearish. Remember that the size of the brick can be setup when you first go through the steps of creating Renko chart. Swing traders may use 50 or 100 pip bricks to represent some fraction of the average daily trading range. While scalpers and day traders may look at 20, 10 or 5 pip bricks.

Renko charts can incorporate many of the usual technical indicators like stochastics, MACD, and moving averages. Today’s strategy will marry up Forex Renko charts with a 200 Exponential Moving Average (EMA) to find trend direction. Very simply, if price is trading above its 200 EMA, then the trend is up. If price is trading below its 200 EMA, then the trend is down.

This filter will give us a directional bias much like a compass or GPS. We will look to only take long trades when the Renko bricks are trending above the 200 EMA. On the other hand, in a downtrend, if the Renko bricks are trending below the 200 EMA, then the trend down. Forex traders will only look to short the market. One of the biggest mistakes swing traders make is entering trades that go counter to the dominant trend. 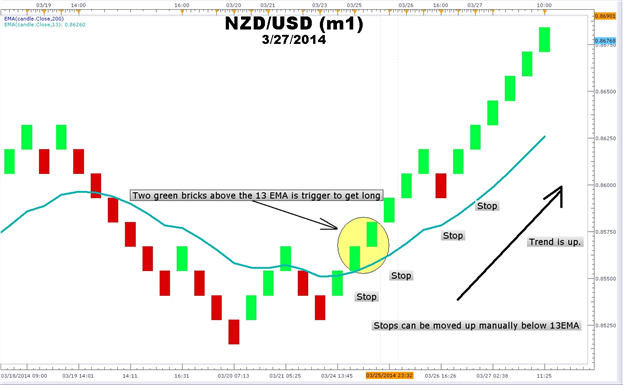 When to Get In

After the dominant trend direction is determined, traders can use the simplicity of Renko charts with a single 13 period EMA as a ‘trigger’ to signal an entry in the direction of the major trend. First, wait for at least two green bricks to appear above the 13 EMA. Then enter long on the appearance of the second green brick above the 13 EMA.

Exiting for Profit and for Loss

Once a trader is “triggered” into the trade, a protective stop can be set one-brick size below the 13 EMA. As long as the bricks remain above the 13 EMA, we look to stay with the trend. Just as the 13 EMA can get you in a new trade, the same EMA can be used to stop out a winning trade locking in profits.

Traders will need to manually move the stop one brick-size below 13 EMA and the current price brick. You can see in the example above how the combination of Renko and the 13 EMA helps traders stay with the trend a longer time.

Interested in learning more about Forex trading and strategy development? Signup for a series of free “Advanced Trading” guides, to help you get up to speed on a variety of trading topics.