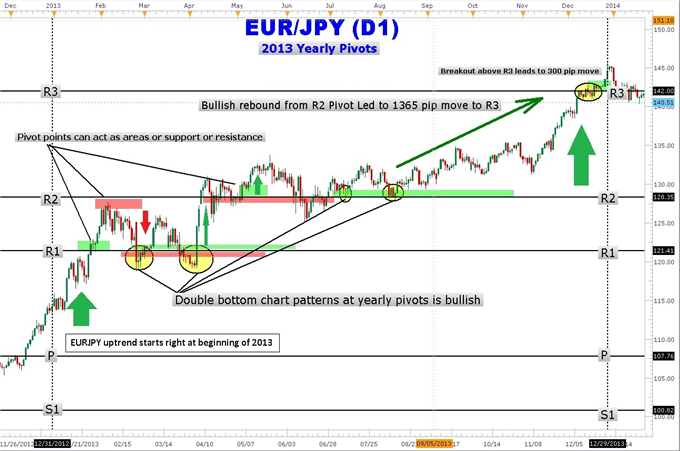 How to Trade EURJPY with Yearly Pivot Points

While a strong uptrend in the second half of 2012 which carried EURJPY into 5-year highs in 2013, EURJPY has been fairly tame in 2014. EURJPY was fueled by a loose Japanese monetary policy affectionately called “Abenomics” named after the Japanese Prime Minster, Shinzo Abe. His “three arrows” plan of fiscal stimulus, monetary easing, and structural reforms was designed to awaken the economy that has been sluggish for 20 years.

EURJPY rocketed over 30% from the lows of July 2012. There were pauses along the way and forex yearly pivots could have been used to climb aboard this strong trend.

Notice in the chart above that the R1 pivot is the first level EURJPY hits at 121.41 in January. Savvy Forex yearly Pivot point traders would have had two days of consolidation to enter long as the currency pair tested support from the top side. From R1, price runs up over 700 pips stopping just short of the R2 yearly pivot at 128.35.

For traders who missed this move up, there was a second and third opportunity to get long EURJPY in the form of a double bottom just below the 121.41 (R!) support. A bullish engulfing candle in April signaled that the uptrend was resuming unlocking another 800 pips.

Finally, EURJPY had built a base on the forex yearly R2 pivot at 128.35. This sideways movement along support paved the way for the massive breakout to the R3 pivot located at 142.00. There was one last break out above R3 to a 5-year high of 145.89.

We can see how yearly pivots can help traders see potential areas of support and resistance. Next we will fast forward to current EURJPY price action and see how we can use yearly pivots to find trading opportunities. 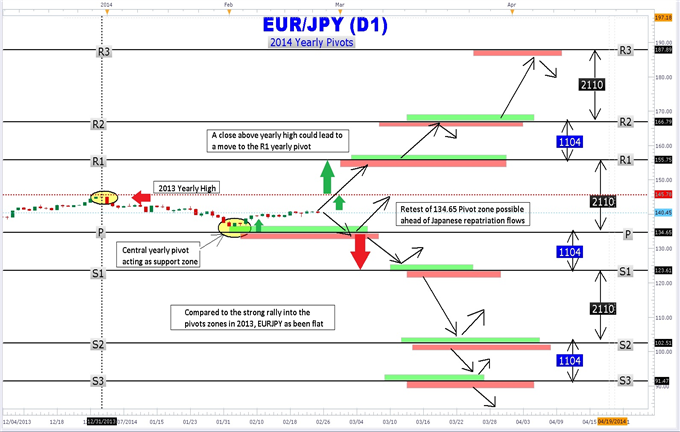 As you can see the chart above, EURJPY drifted from 145 down to 136.22 near the central yearly pivot at 134.65. Sometimes a currency pair hits the pivot exactly, other times it may move a few pip beyond. So rather than thinking of support and resistance levels like pivots as a concrete wall, think of them more like permeable and stretchy zones Yearly pivots have wider margins of error due to their size, so if price comes within 100 or 200 pips of a yearly pivot and changes direction, then we would consider it a “touch”

EURJPY could rally up to R1 near 155.75. However, the old 2013 high at 145.89 stands in the way. Forex yearly pivot traders will be looking at the old high before considering big bullish bets.EURJPY come down to retest the central pivot again forming a double bottom formation for a move higher.

On the other hand we could see seasonal yen strength due to the end of the Japanese fiscal year which happens at end of March. Japanese multinational corporations usually repatriate yen back to Japan to close their books. If these flows are substantial, EURJPY could visit the S1 Pivot at 123.61 before moving back to new highs. A falling stock market and falling US 10 year interest rates could trigger flows into yen as well. These are markets that are highly correlated to yen moves. Watching yearly pivots on EURJPY can help demystify the upcoming moves in 2014.

Since EURJPY is near an important level, I would like to extend to you an invitation to open up an FXCM demo account to place a trade based on what you have learned about yearly pivots. Just click here to get started