- GBPAUD has been in a strong uptrend since April of 2013

- Fibonacci expansion targets can be set to determine profit targets.

Strong underlying economic fundamentals have made GBP a juggernaut against its rival currencies. Improving GDP, reduction in the unemployment rate and better than expected growth across the services, manufacturing and construction contrast with some of the structural challenges the economy faces like low levels of infrastructure investment. Though not perfect, the economy is like the best house in, an otherwise, rundown neighborhood of lack luster economic growth. Slowing economic growth and decline in the global demand for iron-ore have worked to pull Aussie lower. Forex traders have had much success riding the uptrends in GBP versus AUD and JPY in particular. By pairing a strong currency like GBP with a weaker AUD, Forex traders can be assured of being in a strongly trending market. 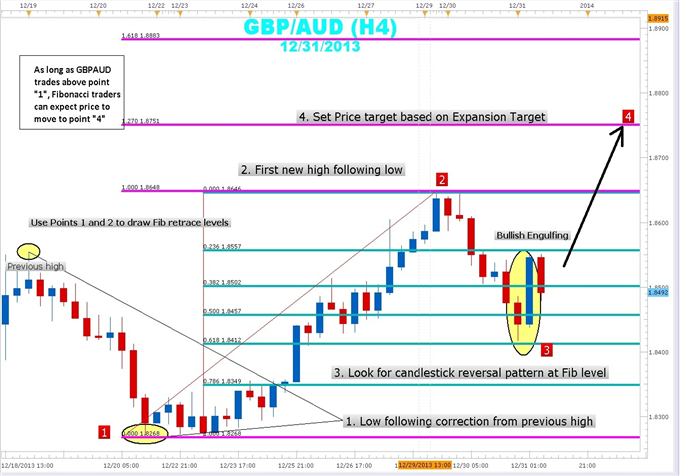 The bullish engulfing candle that has just recently formed confirms the validity of this Fibonacci support area. Forex traders can now expect a new high to be made. Using the Fibonacci expansion tool with the 78.6% level highlighted, traders can look to take profit in this area. The 78.6% level is not a common Fibonacci retracement area, but price expansion targets happen here frequently. The magenta lines are what I personally use in my trading by taking the Fib retracement tool and starting at the high and moving back to the low to create expansion lines. When using the expansion tool from the Market Scope charts menu, highlight the 78.6% level closely approximates the levels shown in the chart above.

By placing a protective stop below the last swing low and next Fibonacci level, forex traders look to give the trade enough “wiggle” room to work its way higher while avoiding being stopped out prematurely. The 1.8750 to 1.8900 area would be the take profit zone and traders may want to take partial profits on half of a position in this area and bring the stop to breakeven on the remaining part. This enables traders to lock in profits while also taking advantage of a possible move higher. Economic fundamentals can tell traders which currencies to trade. But something else is needed to pinpoint entries in light of a clear fundamental picture. The bullish engulfing pattern at a Fibonacci level gives Forex traders confidence that the uptrend is resuming. Fibonacci expansions can help traders determine potential profit while retracements show where to place a stop.

This article showed you how to use Fibonacci to trade GBPAUD. I want to invite you to enroll in our free Fibonacci Retracement Course to further your understanding of Fibonacci. Sign our Guestbook to gain access to this course that will help you get up to speed on Forex market basics. Register HERE to start your Forex learning now!