- USDJPY has been on an uptrend and, after a brief pullback, may continue to rally higher

- Typically, a profit-taking decline ends at one of four major Fibonacci support zones

Fueled by an ultra-easy Bank of Japan monetary policy and a combination of stronger U.S. economic data and rising interest rates, USDJPY has trended up strongly. The surge in USDJPY in November from the 98.00 area to the 104.00 handle was as textbook uptrend with shallow pullbacks disappointing bargain hunters who were looking for a bigger correction.

However, Forex traders may get their chance as USDJPY has run into resistance just short of the 105.00 handle at 104.62 and with the Christmas holidays just around the corner, a profit taking present-buying decline may be in order as traders cash in. But where do Forex traders enter? 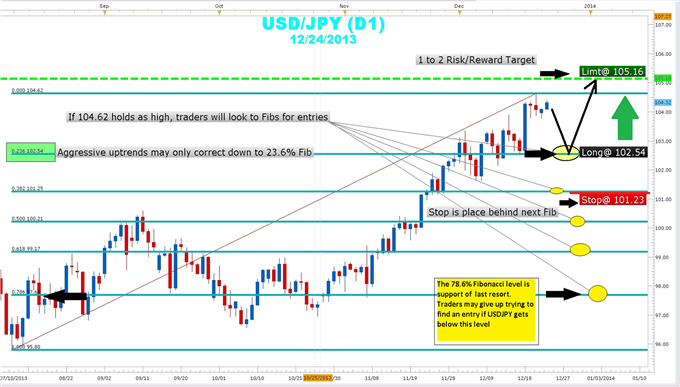 The yen pair have been challenging because in order to draw a Fibonacci retracement, an established low is connected to an established high. If price fails to move lower and makes a new high, then the lines have to be redrawn. Using the October 8th low at 96.55 as our starting point for the Fibonacci tool and connecting it to the December 20th high at 104.62, we can establish five levels of potential Fibonacci support:

Once USDJPY rebounds from the 23.6 Fib level at 102.54 and starts moving up, enter long with a protective stop-loss placed about 4-pips below the next level of Fibonacci support under the entry around 101.23. A limit can be set at 1.0516 which is slightly above the recent high made on December 20th at 104.62. We are looking to risk 131 pips to make 262 pips in profit. In the event that USDJPY does not pullback but resumes the move higher, we would need to redraw our Fibs after the high is established and the profit-taking decline is confirmed.

Just a reminder that though Fibonacci can show great precision and forecasting price targets and rebound zones, traders have to remain flexible in their view of the charts and price action. USDJPY could correct lower to the 38%, 50% or the 78.6% retracements before turning around and heading higher. So if you are stopped out initially, don’t be discouraged as it could take more than one attempt to catch a ride on this trend. This is the reason that it is recommended that traders risk no more than 2% of their account on any one trade. By only deploying a small amount of your capital on any one trade, your account lives to trade another day! Some traders may take their 2% position and divided into three parts. In this way they can place a third at the 23.6% level, and another third at the 38.2% Fibo, and the final third at the 61.8% level. A stop on all the positions would be placed just below the 78.6% “Fibo of last resort”. Using this method spreads out the risk over smaller positions. Whether you choose an “the all in” approach or an incremental method, Fibonacci gives you the road map to rejoin the trend.

This article showed you how to use Fibonacci to trade USDJPY. I want to invite you to enroll in our free Fibonacci Retracement Course to further your understanding of Fibonacci. Sign our Guestbook to gain access to this course that will help you get up to speed on Forex market basics. You can master the material all while earning your completion certificate. Register HERE to start your Forex learning now!