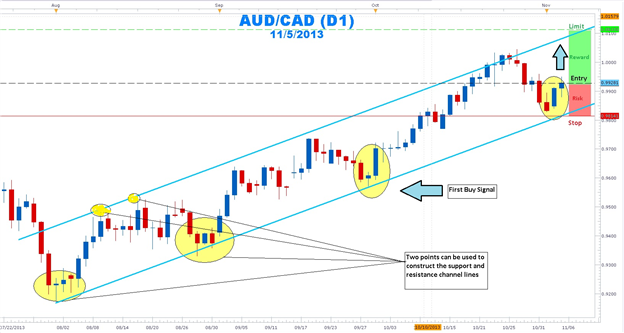 - In a rising trend channel, a buy signal happens when price rebounds at or near support

Forex currency traders like trading horizontal ranges because they are easy to trade. One only needs to buy at support and sell at resistance. If the range is long enough, several repeatable trades can be made. However, when price breaks out of these ranges, traders can be disoriented as price makes a new high and breaks out. In some cases, range traders can be caught on the wrong side of the trade.

However, this initial spiking phase starts to mellow with time and the angle of assent eases. Price action settles into a different kind of upwardly sloping range called a rising trend channel. By connecting two consecutive rising swing lows, the support or base of the channel can be constructed. Similarly, by connecting to consecutive higher swing highs with a trend line, the resistance or top of the channel is created.

Projecting these lines into the future, traders will look for price to come down and test the support line and bounce higher. Waiting for the close of a bullish candle that is formed after the bounce would be the entry signal. Traders would then place a protective stop just below the last swing low and the trend line support. Next, they would place a take profit limit at or near the top of the channel.

Knowing how to read candlestick patterns can help you become a better Forex Channel Surfer! Watch a free 15-minute course on the topic of Price Action Candlesticks. You'll first be asked to sign the guestbook, which is completely free;and then you will be me with the video-based lesson via Brainshark