Forex traders have had to wait patiently for this month’s release of US employment data. Due to the government shutdown earlier in October, NFP (Non-Farm Payroll) figures for the month are set to be released this Tuesday at 8:30am ET. As one of the most anticipated releases on the US economic calendar, Non-Farm Payrolls also known as NFP has been historically known to produce high levels of volatility in the Forex market. The cause of this volatility has evolved from the NFP announcement becominga proxy into the health of the US economy. So based around the number of jobs being added or subtracted to the labor force, traders can look to establish new positions.

First, NFP looks specifically at net changes in employment as jobs are created or subtracted in an economy in any given month. The term Non-Farm is used since farm / agricultural workers are not included in the employment count. The decision to not include agricultural jobs lies in these jobs being largely seasonal that could possibly produce small temporary shifts in labor reporting. Below we can see a composite of past NFP events from October 2011 through present. As you can see these numbers have been anything but consistent, causing problems for traders. So to get an idea of what to expect, let’s look at last month’s event in more detail.

Below we can see exactly what occurred with last month’s price action on a EURUSD 5 minute chart, during the NFP news release. NFP numbers were expected to be released at 180k, meaning analysts expected 180,000 new jobs to be added to the economy. However, at the time of release the NFP number was issued lower than expected at 169k. Traders were left to react to this lower number with the market immediately reacting by selling off the EURUSD. By 10:45am ET, the EURUSD had declined in value as much as 105 pips from the event high at 1.3214!

So what should traders look for this month, with NFP totals again being released tomorrow Tuesday the 21st? Expectations are set again at 180k new jobs to be created. Taking a cue from last month’s report, if expectations are missed or come out better than expected, this could again lead to another round of volatility in the EURUSD. Once a direction is established traders can then trade the news using the strategy of their choosing. 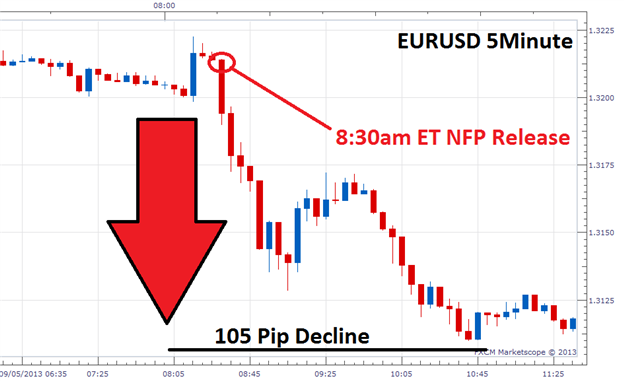 Regardless if you intend to trade the news or maybe just sit on the sidelines, remember NFP can be an exciting and will often bring unexpected volatility. If you do decide to trade, stick with your news trading plan and always keep an eye on risk / reward levels while minimizing the use of leverage.

New to the FX market?Learn to trade like a professional with DailyFX!

Signup for this free “Trade Like a Professional” certificate course to help you get up to speed on Forex market basics. You can master the material all while earning your completion certificate.