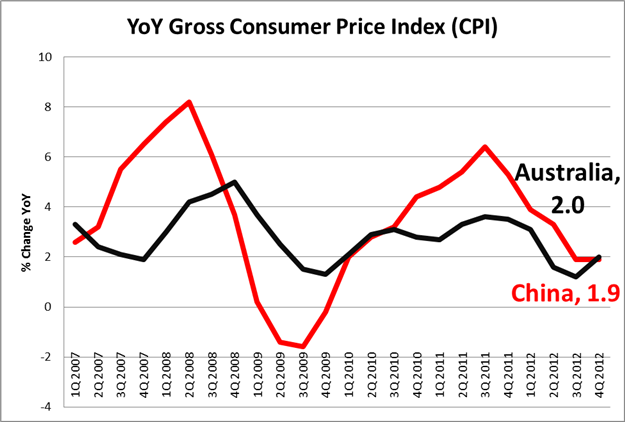 China releases their monthly inflation reading later tonight at 01:30 GMT. Chinese Consumer Price Index (CPI) readings are important to the value of the AUDUSD because of the strong trade relationship between the two countries. This article will outline some of those correlations and how to use the CPI reading to trade the AUDUSD.

It is no surprise that China has grown into a global powerhouse within the past several years. There are several countries that have strong ties to the Chinese economy and Australia is one of them.

According to the Australian Department of Foreign Affairs and Trade, China is Australia’s primary export destination with 29% of exports arriving in China. This is a result of Australia’s natural resources which are being used by China to help fuel their growth.

Therefore, if the Chinese economy slows down, that will naturally affect the need and demand for Australia’s iron ore which is needed for China’s infrastructure growth. As a result, a reduction in the rate of growth regarding inflation could simultaneously reduce the inflation of the Australian economy.

Notice in the chart above how the Chinese CPI reading (red line) leads the Australian CPI reading (black line). Both readings are pointed sharply to the downside with no relief in sight. Economists are expecting the CPI reading to hold steady at +1.9%.

As a result of the correlation above, you can see how the Chinese CPI reading has related to the Reserve Bank of Australia’s target rate. 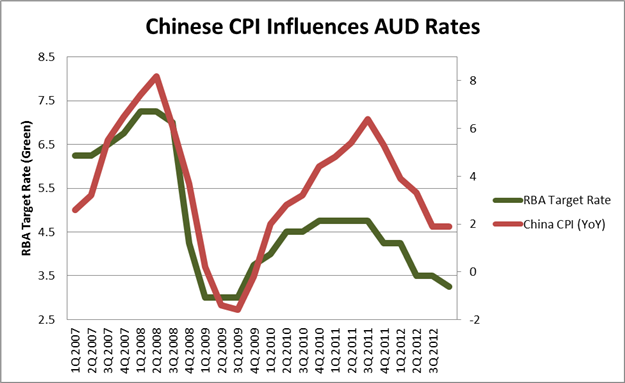 Earlier this week, the RBA announced they were going to hold rates steady in an effort to let previous rate cuts work their way through the economy. This is indicative of the lower inflationary environment that both China and Australia are operating within. The RBA made it clear in their statement following the rate announcement that they are expecting further weakeness, but are seeing if previous cuts will be enough to stimuluate.

“Further effects of actions already taken to ease monetary policy can be expected over time. The Board will continue to monitor those effects, together with information about the various other factors affecting the outlook for growth and inflation.”

In response to the steady interest rate announcement earlier this week, the AUDUSD strengthened on the news. However, there are pressures in the market that show the AUDUSD is at risk of a correction. 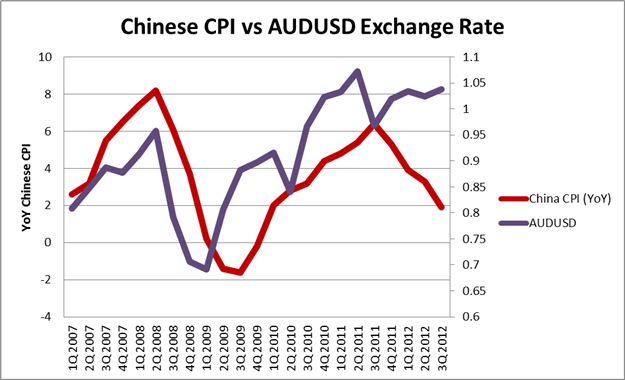 However, as of late, these 2 lines are diverging as the China CPI continues to soften at 34 month lows while the AUDUSD exchange rate remains at elevated levels. Therefore, a surprise China CPI reading to the downside may create an environment where the AUDUSD ‘catches up’ and sells off.

Resistance stands at 1.0480 and 1.0620. Look for 1.0445-1.0480 to provide resistance in a weak CPI reading. Utilize strong money management techniques to manage the trades towards support.

Looking for a strategy to trade? Take our free Moving Averages training course and learn how to use this widely followed indicator in creating a trading strategy.