The Kiwi Consolidates Before a Triangle Breakout

The NZDUSD has been off the radar for most of 2012. The pair has been quietly consolidating between the February 29th high at .8470 and its current standing low of .7454 formed on June 1st. Since the pair has retraced most of its 2012 decline traders are left trying to interpret market direction. One way we can spot trades in a consolidating market is to look for opportunities using pricing patterns in order to trade breakouts of support and resistance levels. Today we will look at trading a developing symmetrical triangle on the NZDUSD.

Zooming in on a NZDUSD 8Hour graph we can see the creation of a symmetrical triangle pattern. To identify it, we first need to identify the graphs current support and resistance points. Resistance for the pair has been created by first connecting the August 6th high at with the August 22nd high of .8125. Triangle ascending line of support has been drawn by connecting the lows formed on August 14th, 17th and 29th. As price is reaching support, breakout traders will look for an end of consolidation leading to a breakout. A traditional breakout strategy can be used with entries set for the creation of a new high or low.

Profit targets can be found by measuring the size of the triangle patter. First, we need to compare the highest high (.8223) and lowest low (.8036) of our pattern. The difference between these two points is 187 pips and can be used as a minimum profit target. Once a limit target is set, we can then use a positive Risk/Reward scenario of our choosing. Stop orders can traditionally be set in the center of the triangle. Once entries, stops and limits are set a trader can then wait for price to break out in either direction. 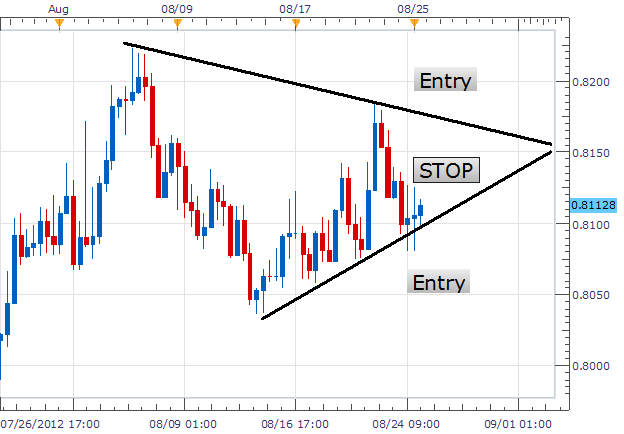 My preference is to set entry orders to sell the NZDUSD on a breakout. Buy orders can be placed over the August 22nd high of.8185, while entries to sell can be placed below the August 22nd low at .8075. Stops for both entries can be set between current support and resistance risking approximately 75 pips. Profit targets should look for a minimum 1:2 Risk/Reward ratio, looking for profit of 150 pips on either entry in the event of a price breakout.

Alternative scenarios include trading the interior of the triangle until an eventual price break.

New to the FX market? Save hours in figuring out what FOREX trading is all about.