The Gross Domestic Product growth rate of the UK is one of many highly anticipated events on this week’s economic calendar. GDP growth looks specifically at changes in growth patterns of an economy by adding household consumption, government spending, domestic investment’s, and net exports for a country. As growth increases it is assumed there will be a high demand for a nation’s currency as that currency is needed to make new purchases. Ultimately this growth (or lack of it) causes inflationary pressures in the market place. With central banks looking to potentially change monetary policy due to these results GDP announcements can become volatile events. Let’s look at this week’s upcoming announcement.

As the most important growth figure for a nation, GDP is tracked on a nation by nation basis. The next GDP announcement for the UK is set to take place next Friday August 24th at 4:30am New York time. As with any news event, numbers released outside of the predicted values can bring volatility and increase the likely hood of a breakout. This month GBP GDP (YoY) is expected to be released at -.6%. Expectations are already set for negative growth; any further decline could cause a severe reaction on the British Pound.

Below we can view the current daily chart of the GBP/USD. An ascending triangle patter is currently seen consolidating price after a 1033 pip decline from 2012 highs at 1.6300. Ascending support is holding up price by connecting the June 1st low at 1.5267 with the July 12th and August 2nd lows. Resistance is found overhead by drawing a trend line connecting the June 20th and July 27th highs. Expecting active markets around the timing of the news event, we can use these pricing levels to begin planning a trading strategy. 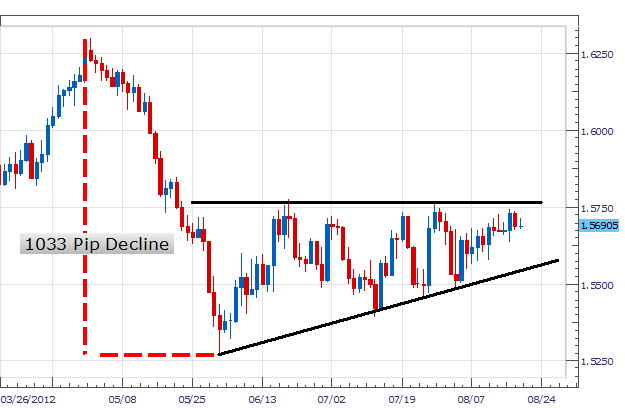 My preference is to set entries to sell the GBP/USD near resistance at 1.5750. Stops should be placed above resistance near 1.5780. Limits should first target support near 1.5575 for a 175 pip profit target. Secondary targets can be placed under 1.5275 on the confirmation of a breakout in the direction of the trend.

An alternative scenario includes price breaking over resistance to new highs. Close attention should be paid to the daily candle close to see if new highs are created.