June is quickly coming to a close with just three trading days remaining. Today we will review the bearish decline and the creation of a pennant pattern on the EURGBP currency pair. By spotting market momentum, we can use this continuation pattern to help find potential entries with the prevailing trend.

Below we our downtrend pictured on the EURGBP weekly chart. Price has declined as much as 1133 pips lower from the established high at .9082 created on July 2011. Current price support for this move resides at the .7949 low created on May 2012. With the EURGBP printing lower lows on the weekly chart, we can then move forward to spot potential entries on other time frames.

Moving in to a 4Hour chart we can look for technical clues to spot market momentum. Below we can see the development of a bearish pennant pattern. This pattern is similar to the bullish penant discussed in the June 20th edition of Chart Of The Day, and is created by connecting our post breakout decline in price to an ascending pricing pattern. Currently this rising channel is formed by connecting the high on April 21st with the highs created on June 4th and 10th. Support is created by creating a parallel line connecting the wicks formed on May 26th and June 16th. The bear pennant pattern is seen as a continuation pattern and will come to completion only upon a breakout to lower lows in an extended down trend.

In the event of a breakout the pattern itself can be used as a price projection. Traders can measure the breakout from support to our current low. This distance can be used from the point of breakout to form a potential profit target. Using present price on the EURGBP this places a projection on the pair below.7800. 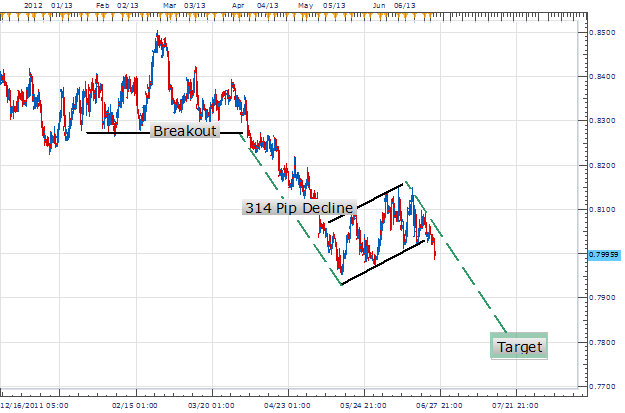