The Euro – Japanese yen currency pair is another Euro cross often associated with strong trends. This pair is the quintessential risk on, risk off currency combination that is often noted for its correlation to US stock indices. Pictured below we can see the ascent of the EURJPY, advancing as much as 8080 pips from the inception of the European currency. Its climb is very similar to the EURGBP currency pair but it should be noted that the EURJPY moved nearly twice as much in terms of pips. It is important to note that ATR levels are considerably greater than other pairs, peaking in May of 2008 at 580.

After reaching this peak in volatility in 2008, the EURJPY promptly declined along with other world markets. Lets look and see why the Japanese Yen has directly appreciated due to ongoing economic disperity. 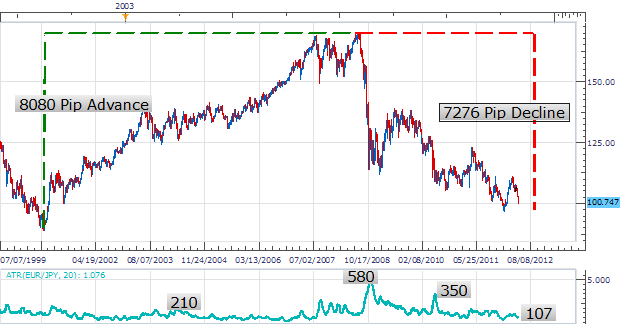 The recent decline in the EURJPY has come about due to the breakdown of the world economy. The Japanese Yen has appreciated in value during this time due to its status as a safe haven currency. This is primarily due to Japan being a net investor in foreign assets. As a net investor, Japanese investors hold more outstanding foreign investments than Japanese assets. When economic times get difficult, Japanese investors tend to bring their money home putting demand pressure on the Yen. This is the motivating reason behind the 7276 pip decline through today’s trading. As investors increasingly withdraw funds from the European continent due to their ongoing debt crisis, the Yen is expected to continue its appreciation.

Trading a pair like the EURJPY is suited for both momentum and trend traders. Due to its long lasting trends, it is critical to identify market direction before applying an oscillator. This can be done using the blocking method mentioned in the March 22nd edition of Chart of the Day. Once a directional trading bias is found we can use MACD to assist in finding momentum and entry points on our charts.

Below, we have MACD with a 12,26,9 input setting on a EURJPY 4Hour chart. Traders can gauge market momentum by using the MACD Zero line. Breakout traders may also use the pricing channel to look for a breakout of resistance and a return to the longer standing uptrend. Regardless of the method traded, keeping an eye on these levels will help astute traders better navigate the EURJPY. 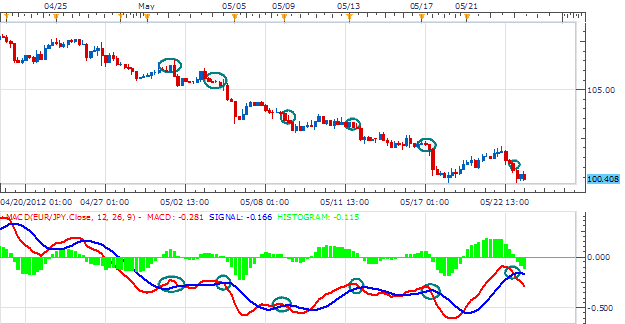