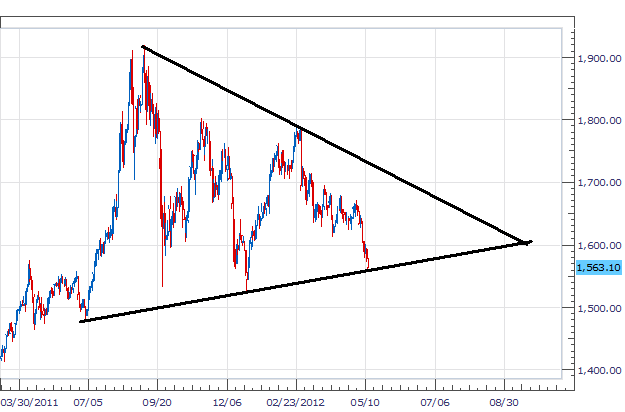 Symmetrical triangle patterns develop across markets in times of consolidation. This charting pattern can be readily identified by spotting converging support and resistance lines and is indicative of indecision with no new highs or lows being formed. Below we have a symmetrical triangle pattern depicted on XAUUSD (Gold) daily chart. Triangle resistance is formed by connecting the current September 2011 high at 1920.80 with the February 2012 high at 1790.55. With these levels in mind, traders may proceed to smaller time frame charts to pinpoint a level of entry.

Once a triangle is spotted traders can plan to either trade the interior of the triangle on a price bounce, or prepare for a breakout. Below we can see Gold on an 8HR chart testing current support residing near 1,5600. Traders can use the oscillator of their choice to help judge a turn in momentum. RSI is currently reading below 30 which is often considered oversold . If a bounce on GOLD occurs we would see RSI return above 30, while indicating a potential buy signal.

Once entered into a trade,its necessary to identify locations for take profit and stop order placements. The easiest method is to use the existing support and resistance levels mentioned previously in this article. To find take profit targets traders may employ a Fibonacci Retracement line using the previous high and todays newly created low. Matching up our curent 61.8% retracement with trendline resistance can help us pinpoint limit orders near 1,7000 . Stops should be placed outside of support under the previous low to create a positive risk reward expectation. 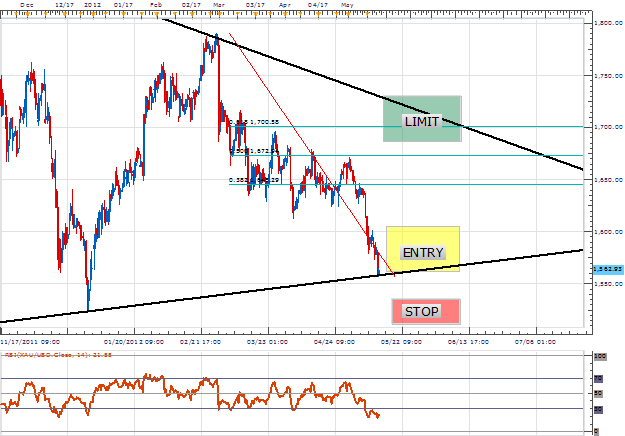 My preference is to trade a bounce on Gold using RSI for a technical trigger. Entries should occur as close to 1,560 as possible. Stop should be placed under the previous low of 1,522.20. Our primary target will remain at resistance near 1,700 for a better than 1:3 Risk/Reward ratio.