The Euro – Swiss Franc currency pair is a currency pair often associated with safe haven status. Specifically over the past four years, traders have turned to the Franc as an alternative to the EURO which continues to be plagued by an ongoing sovereign debt crisis. This has caused accelerated depreciation of the EURCHF pair moving as much as 6761 pips lower from the 2007 high at 1.6828.

Pictured below we can see this decisive move occur, culminating in a low at 1.0067. During its descent, the EURCHF was known for spikes of volatility. One way to measure volatility is through the ATR indicator which tracks the average move a currency pair makes in pips. ATR levels of 270 plus were reported in November in 2008 and spiking again in August of 2011 to levels over 340.

Currently ATR has dropped off with the pair moving approximately 10 pips a day! What has happened to the EURCHF ? 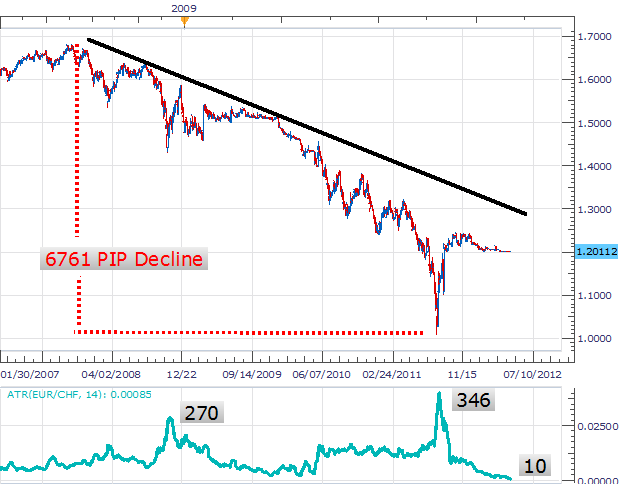 The Swiss National Bank (SNB) is the monetary authority in Switzerland and they have embarked on a policy to stem the appreciation of the Swiss Franc. Using the EURCHF currency pair as a benchmark, policy makers at the SNB have set a minimum tolerated value on the pair at 1.2000. Through open market operations such as quantitative easing the Swiss have effectively been able to down the value of their currency relative to the Euro at present. The current concern for traders is wondering how long cans this policy of intervention last. Newly appointed SNB Chairman Thomas Jordan, has shown his support of a weak Franc with statements such as “The minimum exchange rate does seem very credible now”. With no immediate policy changes in sight, traders will have to be patient and creative when approaching the EURCHF.

Trading a pair like the EURCHF has become very difficult over the past year. Known for strong moves and volatility, the downward momentum of the EURCHF has all but dried up due to the Central Bank intervention mentioned above. Moving less than 10 pips a day the EURCHF pair severely limits a traders opportunities regardless of the strategy chosen.

This has not deterred many retail traders however. Checking in on the FXCM Speculative Sentiment Index shows client positioning vastly to the long side of the EURCHF. Currently 98% of all traders holding positions on the pair were net long. It can only be assumed that traders holding an open interest to the long side are doing so in the anticipation of another round of SNB intervention.

With SSI being a contrarian indicator many traders are waiting patiently for a fresh opportunity to sell in the direction of the broader trend. This would imply a breakout of the current support band residing at 1.2000. Entry orders are a great way to take advantage of this situation. If price indeed spikes higher on fresh intervention our entries can be simply deleted. As well, if support is broken our entry is pending waiting for execution. This way we can set our orders and await the next move on the EURCHF. 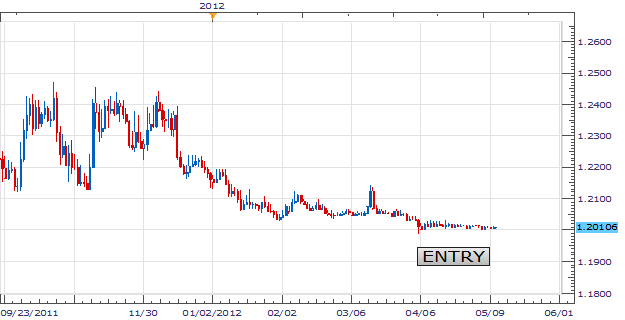