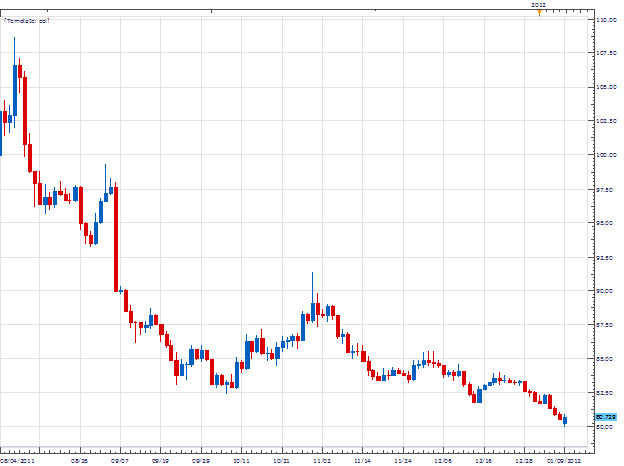 CHF/JPY created one of the strongest downtrends of 2011. The pair turned from its August high at 108.71, and is now trending 2869 pips lower as of today at 80.02. The Japanese Yen remains fundamentally strong, as it remains the “Risk Off” Currency of choice in the market. Conversely, the Swiss are having issues of their own, as the SNB President Hildebrand resigned amid allegations of insider trading. Both reasons make the CHF/JPY pair and attractive option for trend traders. With a direction in mind, we may move into smaller term charts and begin looking for entries.

Next, we will move in on the CHF/JPY 1Hour Chart. Due, to the response from the January 6th Chart of the Day, I wanted to take another look at trading with divergence. As discussed above, our trend is downward so we will look with divergence hidden inside of the trend. This will occur when our price chart continues making lower lows; however our indicator will be making a new high.

Below are two examples of divergence on the CHF/JPY Pair. Our first example is taken by comparing our December 29th high at 82.64, with the lower high at 82.40 created on January 3rd. We can visually see these two points decline in slope by the connected trendline. Divergence occurs when we compare MACD during the same period. A trendline connecting these two points will reveal a higher MACD high being formed.

This setup is repeating at present, by comparing the January 6th high at 81.13, with today’s standing high at 80.96. A lower high is our first indication that our trend is poised to continue. MACD divergence gives us another signal of a possible turn in price with the established trend. While MACD is forming a new high, traders may patiently wait the indicator to cross the signal line for entries. 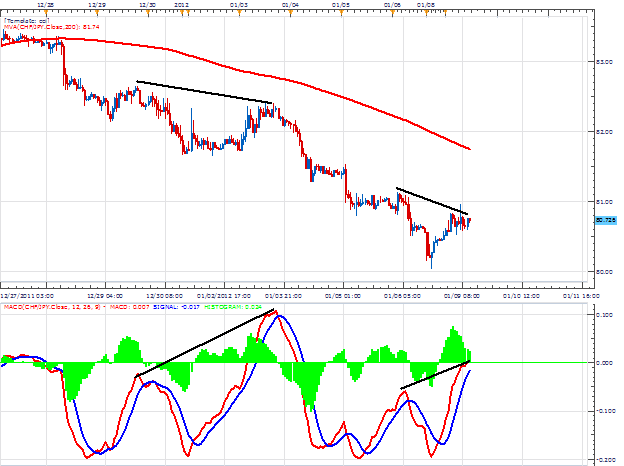 My preference is to sell the CHF/JPY on a MACD crossover near 80.75. Stops should be set over the previous high at 81.50. Primary profit targets may be set at 79.25 for a clear 1-2 risk reward ratio.