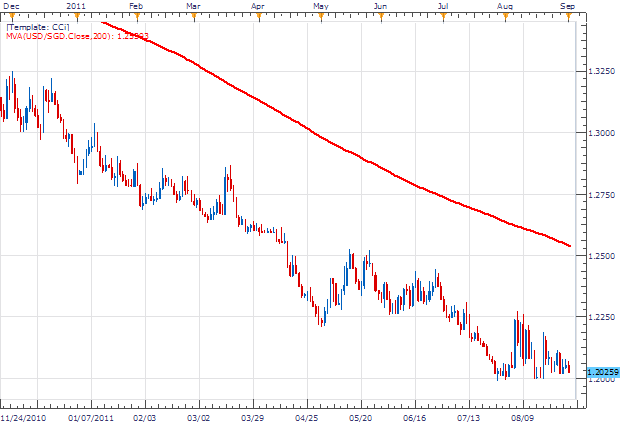 USD/SGD Prepares For Breakout Under 1.1988

The USD/SGD has continued its gradual descent to new lows since last discussing the pair with the chart of the day on May 17th, Flying Tigers. The pair has dropped an additional 361 pips and carved out a new low on July 27th at 1.1988. Previously we were looking for a breakout on the pair aiming for fresh lows, targeting 1.2150. As the pair pauses and consolidates, we can again look for a breakout in the direction of our broader trend.

The Singapore Dollar beams as a bastion of strength in a time of worldly financial crisis. Business is still booming since being declared the third fastest growing economy of 2010 (14.47% GDP growth). To add to its credit, Singapore was recently credited as the best country in the world to do business in 2011, by The World Bank, citing its friendly environment and their rapidly growing economy. If this boom continues to be the norm, we can reasonably assume this currency trend will continue as well.

Taking price in to an 8Hour chart we can see the USD/SGD begin to wedge lower in a consolidating pattern. Resistance has been built connection our August 4th high at 1.2257 with the wicks created on August 8th and 18th. Support is still found at our all time low at 1.1988. Breakout traders may begin looking for entrys, to trade with the trend on fresh lows. 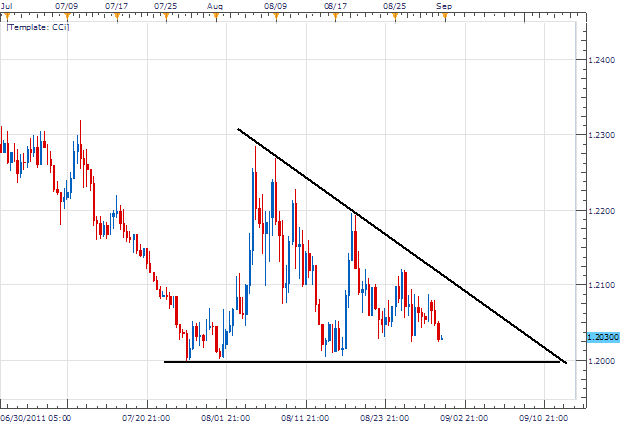 Alternative scenarios include price continuing to consolidate further, prior to an eventual break.