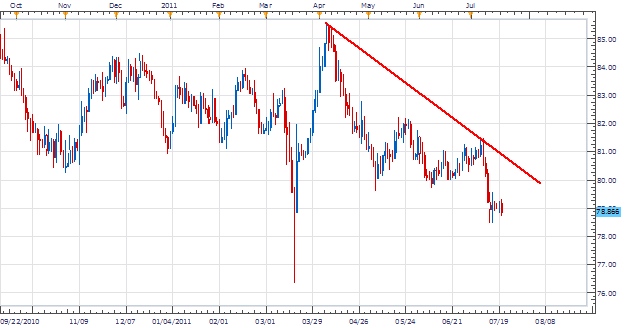 The USD/JPY has seen a 400 pip price range for the majority of the trading year between 80.00 and 84.00. However, the pair has recently sprung to life looking to continue its four year down trend from the May 2007 high at 124.13. Over the last three months, price has steadily created lower highs and lower lows preparing us for a resumption of our larger directional bias.

Fundamentally, the United States continues to be viewed as weak. Holding over 14 trillion plus in public debt, the US Dollar dilemma continues making the currency a speculative target. As politicians state side continue to debate and argue over debt ceilings and future quantitative easing we will look for our trend to continue.

Moving to a 4H chart, we can see price consolidating at the bottom of our previous leg down in a triangle formation. Resistance is found by connecting the previous highs on July 12th(79.85) and 19th(79.13). Support is being held up from the lowest low displayed as wicks on the 12th (78.45) and 20th (78.71). Traders have two options, either wait for price to trade up and become overbought near resistance to enter with the broader trend or trade a breakout of established support. 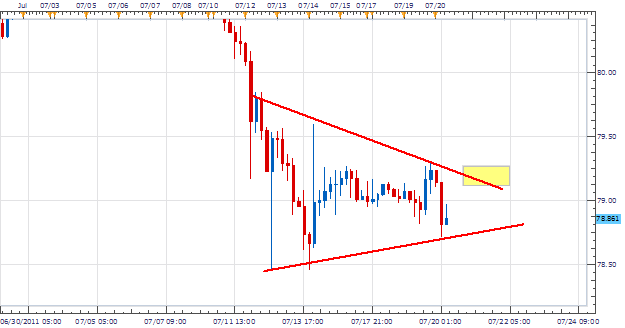 My preference is to sell the USD/JPY against resistance at the top of our consolidating triangle near 79.20. Stops should be placed over the pattern high over the 79.90 handle. Limits should be set at .7780 or better, setting up for a minimum return of 140 pips for a clear 1:2 Risk/Reward ratios.

Alternative scenarios include price immediately moving below support for a larger breakout below 78.40.