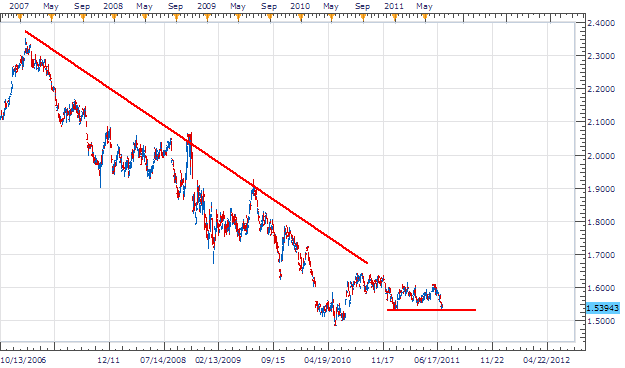 GBP/CAD Trend Threatens to Break Out Under 1.5280

The GBP/CAD has temporarily resisted a further move down in a broad trend established over 4years ago. With the 2.3564 high firmly in place from January 2007, the pair has moved a total of 8735 pips to its low of 1.4829 created in May of this Year. Temporarily trading in a range the pair is waiting for a key breakout to show new technical direction and further decline for the pair.

On the fundamental front the BOE rate decision was released this morning at 11am GMT. Economic Calendar . Key interest rates from England’s monetary authority were left unchanged at .50%, maintaining a policy that has been in place since 2009. Fundamentally money follows yield as it seeks the highest rate of return. As the BOE remains poised to allow rates to stay artificially low, we can reasonably assume our downward trend will continue.

Taking price in to an 8H chart, the GBP/CAD finds itself inside of a range. This range has found resistance firmly at 1.6100 levels. Likewise support is found at the January 3rd low of 1.5286. If the broader trend is to resume, a new low must be printed on our chart. Traders can trade using entry orders bellow support in anticipation of a break out to test all time lows 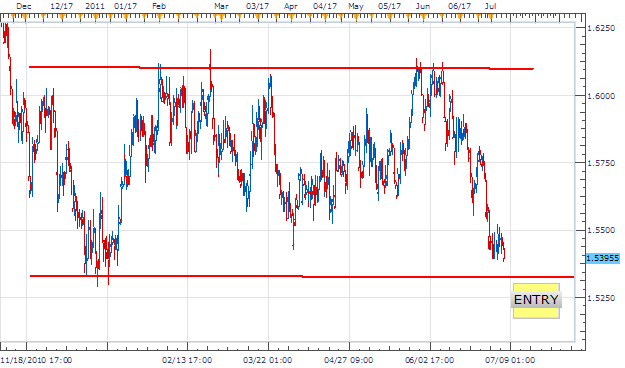 My preference is to sell the GBP/CAD below current support, staying with our established down trend. Entry's should be placed under support near 1.5250 or better waiting for a break of the January 3rd low. Stops should be placed at half the distance of our range at 1.5640. Limits should look for new, all time lows near 1.4540 for a clear 1:2 Risk/Reward setting on the trade.

Alternative scenarios include continued consolidation on the GBP/CAD prior to our break.