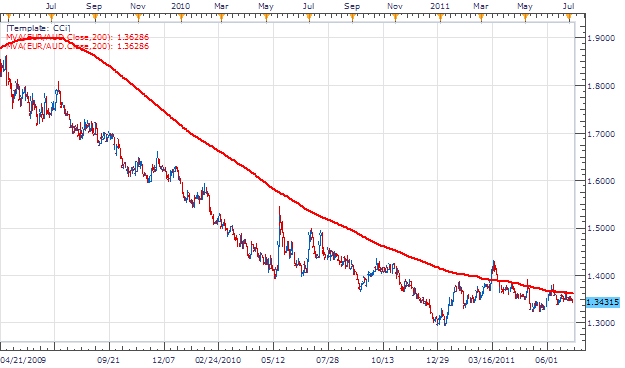 EUR/AUD Forms a Head and Shoulders Pattern Under 1.3500

The EUR/AUD has had a relentless downtrend since its October 2009 high, being created at 1.9112. Recent movements to the downside however have been slowed by the formation of the May 11th low at 1.3226 of this year. As price has moved in a consolidating pattern over the past four months, the pair looks poised for another breakout to lower lows.

Fundamentally the Euro still looks troubled. The latest round of the European debt crisis has seen the downgrade of Portugal’s credit rating by Moody’s yesterday. Moody’s downgraded Portuguese debt by 4 marks moving it from a Baa1 rating to Ba2 which is considered junk status. As the fundamental picture still looks dim we can look for our trend to continue.

Taking price in to an 8H chart, we can see a head and shoulders pattern being formed. Normally these patterns are an indication of a price breakout, confirming the creation of new lows on our chart. The left shoulder is formed from the June 21st high at 1.3606 followed by the head created by the June 27th high of 1.3686. The neck line has just been broken under the 1.3500 figure confirming the formation of our right shoulder of our pattern. 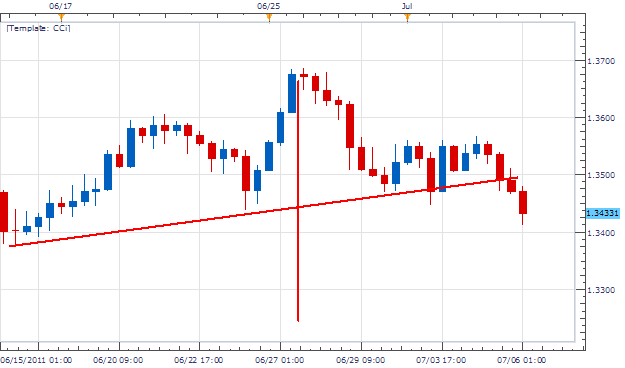 My preference is to sell the EUR/AUD, staying with our established trend and in line with our charting pattern. Entry’s should be placed as close to resistance as possible near 1.3500. Stops should be placed above our neckline over 1.3625 or better. Limits should be by finding the distance from our high to the center point of our neck line. We should be looking for a minimum of 250 pips in profit placing our limits near 1.3250 for a clear 1:2 Risk/Reward setting on the trade.

Alternative scenarios include continued consolidation on the EUR/AUD prior to our break.