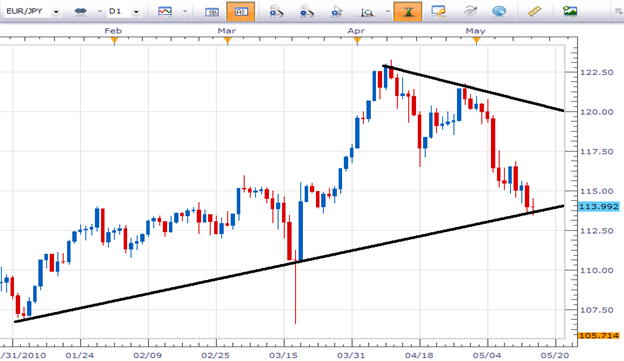 The EUR/JPY is well off its trend high at 122.87, established on April 10th of this year. Since this point the pair has fallen 945 pips, to the current monthly low at 113.42. The pair is currently testing support line at the 114.00 level that has been in place since January 2011. This is the third touch of support and a validating bounce builds the potential for a consolidating Chunnel Pattern between resistance near 120.00.

The Euro Zone released CPI (Consumer Price Index) figures this morning and the results showed signs of growing inflation. CPI was released at 2.8% for the month of April, which is the fastest price growth seen out of the Euro Zone in over 2 years. These higher inflation numbers may signal a push for future rate hikes from the ECB. As money follows yield, they Euro has the ability to continue its move against the Yen.

Taking a look at price on a 4Hr chart we can better view our support and resistance lines. Price has continued moving lower through the month and now testing know support levels. Support is currently sitting near 113.60 where price is currently threatening to break lower. A price breakout lower would indicate a potential test of the March 17th close at 110.68 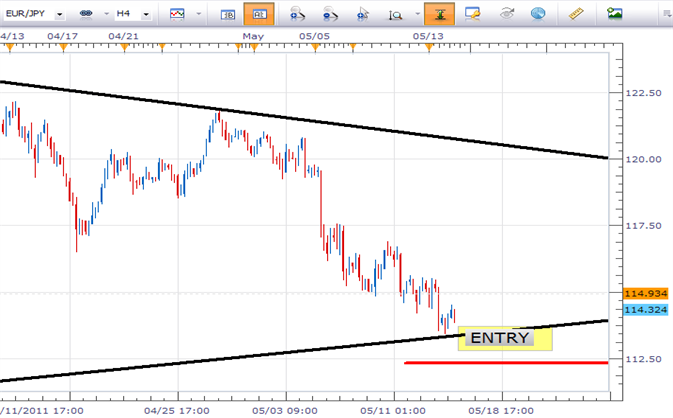 Alternative scenarios include price continuing downward breaking support. This would open up a test of 110.68.