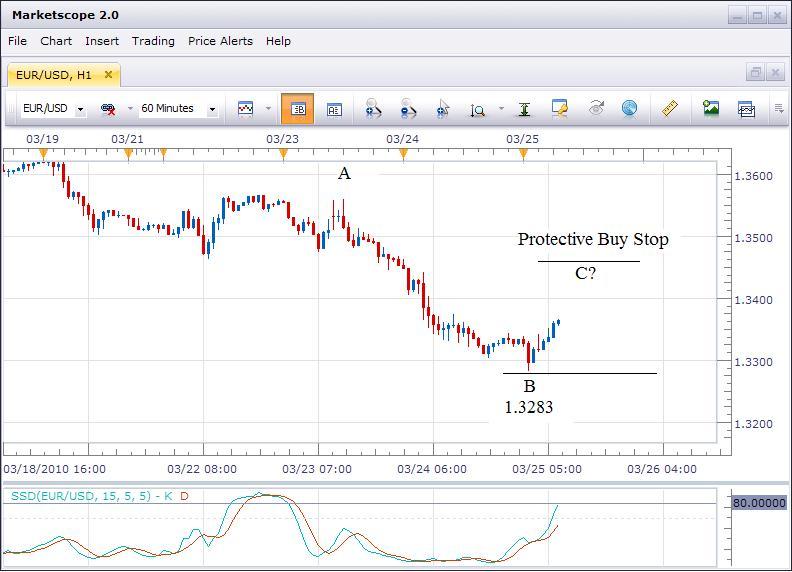 The hourly chart of the EUR/USD is a good place to start considering the strength of the downtrend noted on both the daily and 4-hour chart.

The idea is to once again look for the ABC move to identify the sell setup. We see Point A as the top of the move down with Point B being the low of that same move. Now we get to the tricky part of attempting to identify Point C and the actual sell entry. As I've stated before, this part can be different for each trader as we all see things differently. Many traders will just wait for the move down through support at Point B to sell as they feel that this is the ultimate confirmation of the downtrend being intact. They would then place their protective buy stop above Point C and look for at least twice that risk in profit. Others will attempt to sell before that break and use their favorite technical indicator to help time their entry. I also have a Slow Stochastics with a value of 15,5,5 plotted on this chart. There is no specific reason for this particular indicator other than personal preference. It is not better or worse than any one that you might prefer. But the sell is after the %K line (blue line) crosses back down through the %D line (red line) after having been above 80. It is important to wait for that particular candle to close after the crossover is noted to make sure we can confirm the event. The lines can change during the hour which means a crossover can "uncross" before the end of the hour if the market starts to rally. The sell entry is simply at the open of the next candle after the crossover. The protective buy stop is still above Point C at the time of entry. Waiting for the break down through support most likely will offer a higher win percentage, but a bigger initial risk. Using an indicator to enter before the breakout means less risk by most likely a lower win percentage. The decision on how to identify the entry is up to each trader and their personal comfort zone.