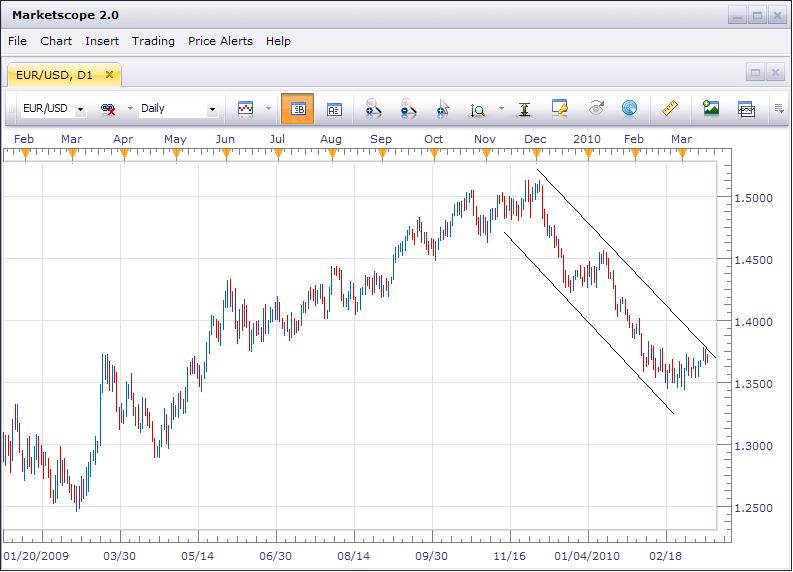 I also believe that it is the technicals that show us how we get between those two points. So I am of the opinion that is the economic calendar that offers the first hint of a potential trend change.

When I look at the EUR/USD daily chart, I see a strong downtrend.

This means that the USD is stronger than the EUR. While there are many factors involved, we know that the European Central Bank (ECB) does not seem interested in raising rates while the US Federal Reserve has already raised the Discount Rate once. That may be enough for now, but today we may find out more about what they think when the FOMC, which is the Federal Open Market Committee, the group that is responsible for that decision at the US Federal Reserve, gives us their thoughts at 215PM Eastern.

However, that may not mean selling pressure at 216PM Eastern. Markets seem to get a kick out of catching as many people as possible leaning too far in one direction by moving in the other direction. The expectations of traders are always key here and there is really no way to measure that until you actually see it play out on the charts.  Professional traders will actually take the time to read the FOMC announcement before trading or even wait for their analysts to pick it apart to make sure there is not some hidden meaning in their carefully chosen words. If it works for them, then it should work for us. So read the report first before making a decision. If you are not comfortable doing that, check out what the analysts at DailyFX have to say after they read the report. But be measured in your actions immediately after the release to make sure you aren't one of those leaning too far in the wrong direction.