The placement of stops and limits is a critical component to successful trading.  Stops are put on a trade to take a trader out of a trade at a predetermined point at a worse price than the current price.  Think of them as a safety net, that will prevent you from losing more money on this trade. Stops are often set based on a certain percentage of loss relative to the size of the trader’s account, or based levels of support and resistance.  These are two of the more widely used criteria.  Whatever method is chosen, it is imperative to have a protective stop in place on each and every trade that is placed.  Without them, a trader leaves themselves open to potentially catastrophic losses.

A limit will take a trader out of their position as well, but at a better price than the current one.  Limits are often based on levels of support or resistance as well though they are sometimes also based on Risk Reward Ratios.  You can consider limits to be your “target” for a trade, where you want to get out if the market goes far enough in your favor.  While many would not consider limits to be as critical to prudent trading as stops would be, limits can be very helpful in assisting the trader in making the critical decision regarding when to exit a trade.

In essence, our protective stops should be placed at a logical point based on the chart, where the markets “should not trade” if our trading assumption was correct.   Let’s take a look at a chart to elaborate on this point.

In the trading scenario depicted above, we see the pair is in a downtrend.  Moreover, it has respected the trendline that we have put on the chart.   Based on this, we would take a short position each time price action trades up to trendline resistance without a candle closing above the line.  We can see that the pair traded up to our trendline and did not close above it.  At that point we can sell the pair.

Our stop on the trade would be placed above the trendline so that the pair has a little room to breathe.  If we place our stop precisely at the level to which the pair has already traded, we run the risk of the price trading up to that same level again and stopping us out perhaps just prior to the trade moving in our direction.  Since this is a Daily chart (the longer the time frame, the wider the stops need to be) and this GBPAUD is a pretty volatile pair, our stop should allow a little more breathing room than we would give on a 1-hour chart for a less volatile pair.  We have placed our stop in an area that “the pair should not trade”.  If the pair does trade in this area, we want to be out of the trade since the trendline will have been compromised and our trading plan is no longer valid.

In this case, a stop in the range of 50 – 75 pips above the trendline might be in order.  That would allow the price to spike above our trendline to a fair degree without stopping us out.

Let’s look at a couple of other methods for stop determination. 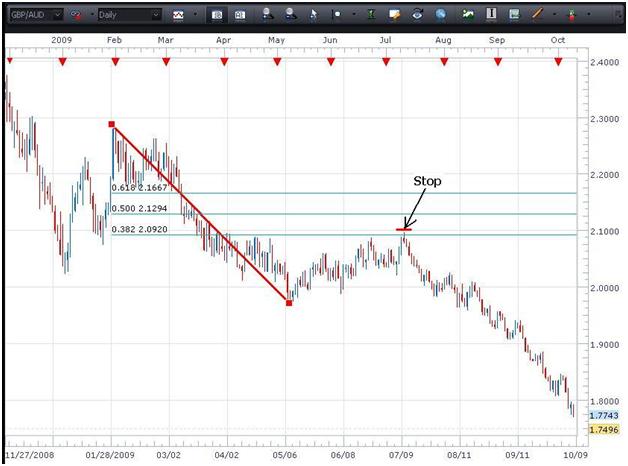 Using the same chart, but using the Fibonacci Retracement tool, we see that price action retraced up to the 38.2% level, the same point that priced touched our trendline in the previous example.  Once the trader sees price respecting one of the Fib levels, a short position can be taken with a stop just above the Fib line.  Once again, the 50-75 stop above price action and the Fib level would apply.

The ATR (Average True Range) indicator can also provide insight as to the distance that we need to place our stop from our entry.  When you put an ATR on a chart, it will tell you the average distance that the currency in question will move over the time frame on the chart. 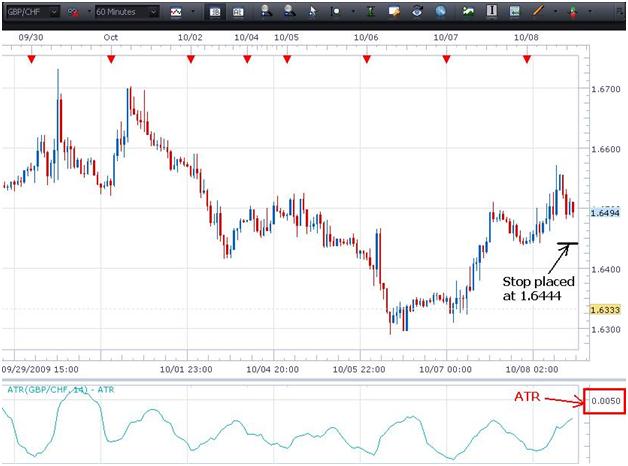 One of the keys to stop placement is to allow the pair some room to move.  New traders oftentimes will place very tight stops since they do not want to have too big of a loss on a trade.  While that thought process makes sense, it is quite likely setting yourself up for failure.  By placing a stop too close to where the pair is trading is almost begging for the stop to be triggered.

Another factor to be taken into consideration when placing a stop is the size of one’s trading account.  Most new traders find this somewhat surprising.  It is critical however not to put too large percentage of your account at risk by placing a stop too deep.

A way to monitor this is to follow the 5% rule.  A trader should not put more than 5% of their account at risk at any one time.  Using the ATR example on the 1-hour chart of the GBP/CHF pair above, we saw that a 50 pip stop was required, based on the ATR method.  If I have a $1000 account, 5% of it is $50.  So, based on our rule, a trader with that account size could place one trade with a 50 pip stop on it.  If the stop is triggered, the $1000 account would become a $950 account, having absorbed a 5% loss.  Following the 5% rule a trader could not open any additional positions since they would be putting more than 5% of their account in jeopardy.  Most professional traders seem to follow a 1% or 2% rule in this area.

Limits can be set to exit a trade based around support and resistance levels or a Risk Reward Ratio. 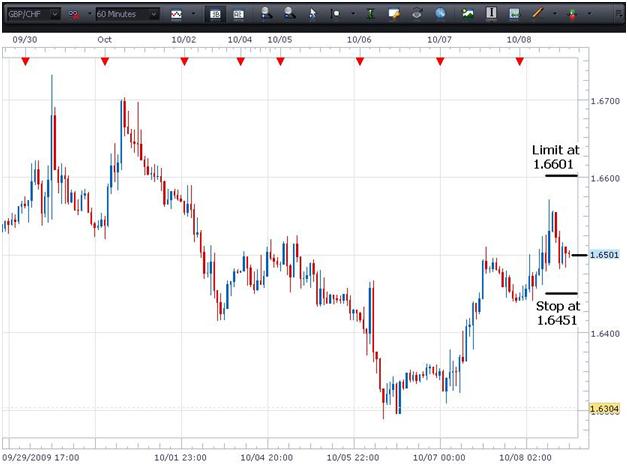 Using the Support Resistance level to determine exit points can be seen on the chart below. 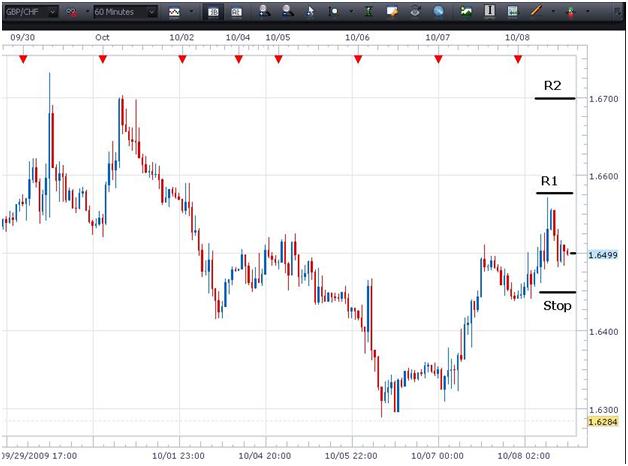 On this chart we can see our first Resistance level (R1) and our secondary Resistance level (R2).  Price action already was stopped once at R1 and that may present a barrier again.  So a trader might choose to exit all or a portion of their positions as price approaches that level again.  Assuming that price action breaks through the R1 level, the next target would be R2 at about the 1.6700 level.  We can see on the left of the chart that the 1.6700 level successfully acted as resistance earlier and most likely will present a ceiling again as the pair approaches that level.

Managing your risk is an integral part of trading, and Stop and Limit orders are some of your most powerful risk management tools.  Take some time to practice placing stops and limits in a demo account to feel out the process in your trading.

To learn in-depth trading tips and advance your strategy with personal attention from our experienced course instructors, take a DailyFX Course.