Support and Resistance is the most important thing Technical Analysis.  Let’s start out our discussion by looking at a chart.

As you can see on the chart above, Support is a price level below which a currency pair has difficulty going and Resistance is a price level above which a pair has difficulty going.  Think of the area between support and resistance as being a room.  Support is the floor and resistance is the ceiling.  The pair will move between those two levels until a “breakout” occurs in one direction or the other.

In theory, support is the price level at which demand (buying power) is strong enough to prevent the price from declining further.  The rationale is that, as the price gets closer and closer to support, and becomes cheaper in the process, buyers see a better deal, and are more likely to buy.  Sellers become less likely to sell, since they are getting a worse deal.  In that scenario, demand (buyers) will overcome supply (sellers) and that will prohibit price from falling below support.

As one might suspect, support does not always hold.  When price breaks below support, that indicates that the sellers have won out over the buyers.  This breach of support indicates that now the trading mindset is more inclined to sell than buy.  After a support level is broken, a trader can expect another level of support to be established at the next point where buyers have established themselves.

Resistance, on the other hand, is the price level at which supply (selling power) is strong enough to prevent the price from rising further.  The rationale behind this is that as the price gets closer and closer to resistance, and becomes more expensive in the process, sellers are more likely to sell and buyers become less likely to buy.  In that scenario, supply (sellers) will overcome demand (buyers) and that will prohibit price from going above resistance.

Like support, resistance does not always hold and a break above resistance demonstrates that the bulls (buyers) have won out over the bears (sellers).  Since resistance has been broken, buyers now have an increased willingness to buy at even higher prices since price has continued to move up, and doesn’t look likely to come back down.  Once the former resistance level is broken, a new level of resistance will be formed at a level where sellers have taken a stand.

There’s an old support/resistance axiom that I would like to share with you.  When support is broken it becomes new resistance.  When resistance is broken it becomes new support.  Let’s go back to the room analogy that was mentioned earlier.  Let’s say you are in a two story building and the floor gives way and you fall through it to the lower level.  The floor that had been supporting you until it gave way, is now the ceiling that is above you…old support (the former floor) becomes new resistance (the new ceiling).  Conversely, if somehow you were able to jump so high that you were to go through the ceiling of a room, you would be standing on the former ceiling which is now the new floor.

Let’s take a look at this concept on a chart. 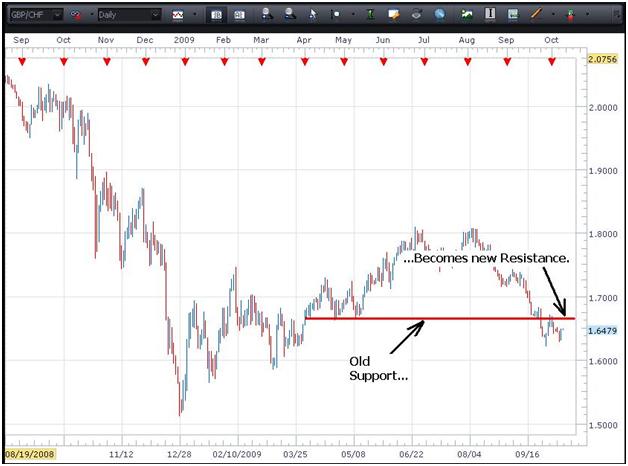 We can see on the above chat how once the old support line is compromised when the pair trade through it to the downside, it now becomes new resistance.  Conversely when resistance is broken through on a chart, it becomes new support.

As seen on the chart below, support and resistance levels can be identified by looking for areas of “congestion” on the charts…areas where the buyers and sellers have been battling over control. 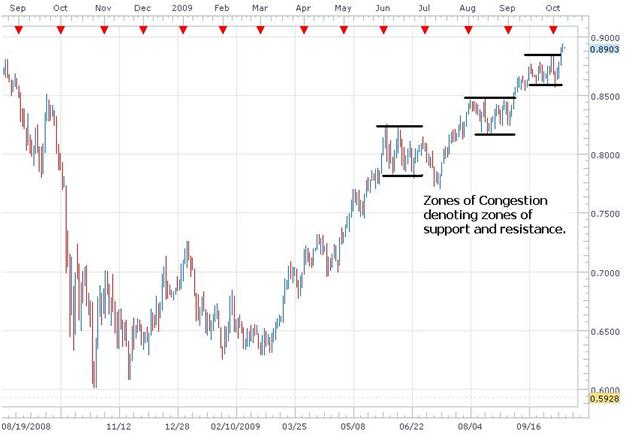 Also, levels can be established by connecting the recent lows for support and recent highs for resistance. 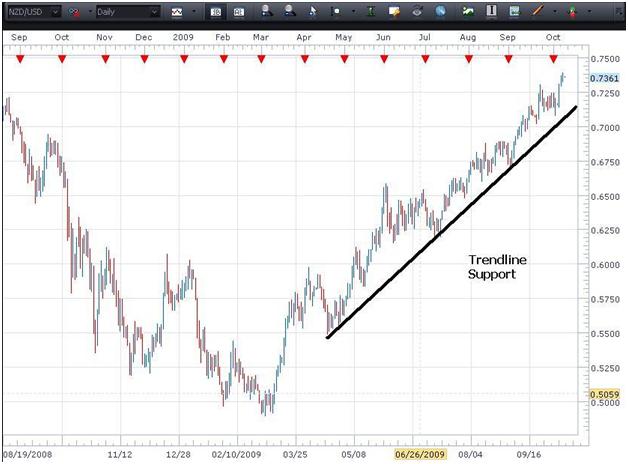 In an uptrend, once the trendline is established, a new long position can be taken when price action trades down to support and respects support so that a candle body does not close below it.

Ideally, for a trendline to be considered valid, we would like to see three “touches” by price action along the line.  Until that third touch occurs, there is not enough evidence to say that the trendline is a true trendline. 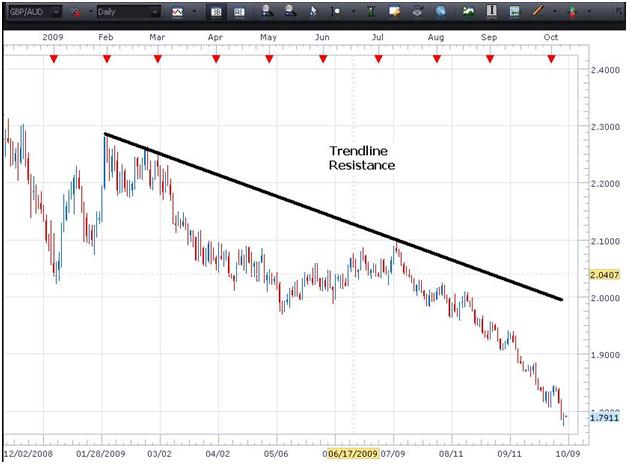 In a downtrend, once the trendline has been established, a new short position can be taken each time price action trades up to trendline resistance without a candle body closing above the line.

Support and Resistance levels are critical in employing a Range Trading strategy.  On the chart below we can see how this AUD/JPY pair continues to trade between established levels of support and resistance.  A trader would engage in Range Trading by buying at support and selling at resistance.  The trader can do this repeatedly until a breakout occurs. 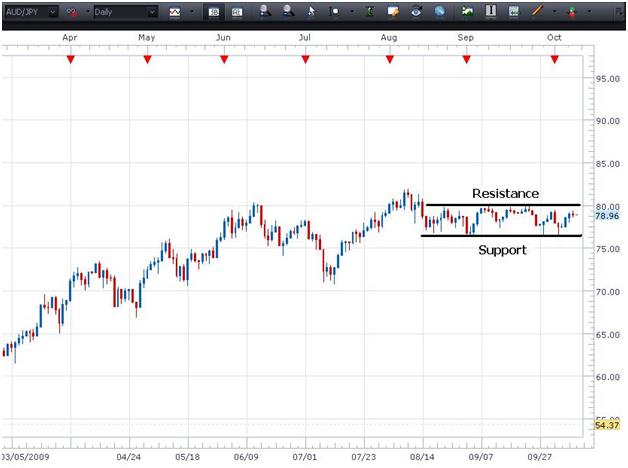 It is important that a trader be able to identify key support and resistance levels in order to successfully practice technical analysis.  Since interpreting charts is not an exact science and it is difficult to establish a precise level, simply being aware that these levels exist and their approximate location on a chart can enhance one’s analytical skills.

Should a support or resistance level be broken, that is a sign that the relationship between supply (sellers) and demand (buyers) has changed.  If support is broken, sellers now have the upper hand whereas if resistance is broken the buyers are now in control.

Next: Stops and Limits