You may have heard the expression “the trend is your friend”.    Well, that could not be more true when it comes to trading.  Being able to identify the trend on a currency pair -- the direction in which the pair has been moving for an extended period of time -- will benefit a trader greatly.  Trading in the direction of the trend on the Daily chart is like running with the wind at your back.  Except that, when trading, the trader has the momentum of the market behind their trade.

The first step in determining the trend is to check the Daily charts of each currency pair, and look for the strongest trend in either direction.

Below are a few examples of a currency pair demonstrating a strong trend.

If a pair is in a strong uptrend, it can easily be identified on a Daily chart.  There should be no question in a trader’s mind which way a pair is trending.  If a trader is not sure of the direction, choose another currency pair as we are looking for the strongest available trend to trade.

We can see in the NZD/USD Daily chart above, simply by looking at the chart, that the pair is in an uptrend.  In addition to visually seeing the trend of the currency rising to toward the top-right corner of the chart, we can also confirm the uptrend by noting that the pair has been building higher highs (in green) and higher lows (in red) as it moves up.

When trading an uptrend, an excellent strategy is to wait for a pullback to a support level and then take a long (buy) position in the direction of the Daily trend.  On the chart above, once the uptrend has been established, a trader could take a long position near the points denoted in red on the chart.  This technique is known as “buying on dips”.  The stop-loss would be placed below the lowest point that the price had traded in each of those pullbacks.

The opposite would be true when trading a downtrend.  Take a look at the chart below. 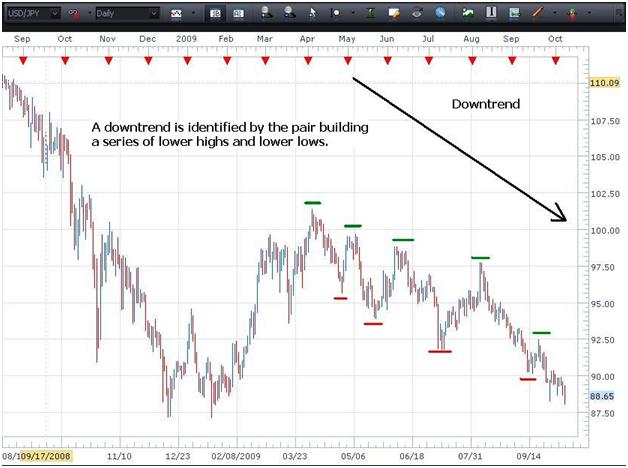 The downtrend is identified when the pair has been building lower highs (green) and lower lows (red).  In this case, the trader would sell into the downtrend by waiting for a pullback to a level of resistance (green) and then taking a short position in the direction of the Daily trend, with a stop above the highest point to which the pair traded in the pullback.  This is called “selling on rallies”.

The key here is that by trading in the direction of the Daily trend, the trader will be entering trades that have a greater likelihood of success since the momentum of the entire market is behind them.  While pips can be made trading against the trend, any pips earned in a countertrend trade will come with a much greater level of risk associated with them.  As traders, we want to eliminate as much risk as possible from each trade.

You should now have an understanding of the way to determine the trend of a currency pair.