Every trader knows (or should know) the impact of economic numbers on the market.  Economists gather and announce their estimates on what the numbers should be to the press.  If the estimates are in-line with the actual figures, the market is said to have “priced in” the numbers, and will often barely react when the official announcement is made.

No economic number plays into the above scenario more than the US Non-Farm Payroll (NFP) release.

First off, let’s identify what the number actually represents.

Non-Farm Payrolls refers to monthly survey data released by the U.S. Department of Labor Statistics at 8:30 a.m. Eastern time on the first Friday of every month.  The report estimates the total number of paid workers in the US, excluding  those working in:

To obtain these statistics, the U.S. Department of Labor Bureau of Labor Statistics, surveys about 160,000 businesses and government agencies, representing approximately 400,000 individual worksites, in order to provide detailed industry data on employment, hours, and earnings of workers on the payroll.

Below is a chart showing the NFP numbers from February 2008 through October 2009.

Increases or decreases in nonfarm payroll data are used as an indicator of US economic health, since the report shows whether U.S. businesses are adding to or subtracting from the job pool.

Nonfarm Payrolls has proven itself to be one of the most significant fundamental indicators in recent U.S. history.  As a report of the number of new jobs created outside the farming industry each month, a positive or negative NFP can get traders to act very hastily.  A better-than-expected figure is often very bullish for the US dollar, whereas a worse number usually results in traders referencing themselves to another component of unemployment released on the same day: The Unemployment Rate.

Unemployment measures the amount of people that are out of a job, but are actively seeking one.  It tends to be the more politically important number.  If this number is smaller, then it means that the people that are seeking jobs are finding them, possibly meaning that businesses are doing well and that the economy is expanding.  The NFP is a number, usually 5 or 6 figures, whereas the Unemployment Rate is a percentage.  If the NFP comes in better than expected, then traders will tend to buy dollars.  However, should it come in worse than expected, they will look at the Unemployment Rate to check whether or not the change in unemployment was either positive, negative, or unchanged.  If it increased, dollar bearishness would be confirmed.  If it decreased, dollar buying would often ensue.  If it was unchanged, then mild dollar bearishness could be started by adamant dollar bears.  It is difficult to trade the NFP and Unemployment Rate only because many times traders will not pay attention to what seems to be the most significant components, but will instead focus in on what reinforces their bias.  The release typically causes a significant amount of volatility in the markets.  Also there are often revisions to the previous month's numbers that come out at the same time and can also vary widely.

As might be interpreted from the above, trading this number can be quite challenging.   While some traders look forward to the first Friday of every month with eager anticipation, others shut their trading station down at sometime Thursday night prior to the announcement, wanting nothing to do with this volatility.
For a visual of the potential volatility, take a look at a 5 minute EURUSD chart below at the time of the October 2009 release.  The announcement took place at the arrow labeled “NFP Announced”.  Note that within the first 5 minutes the pair spiked down 60 pips and then ultimately traded up 160 pips from that spike.  It is the nature of this volatility that many traders wish to avoid. 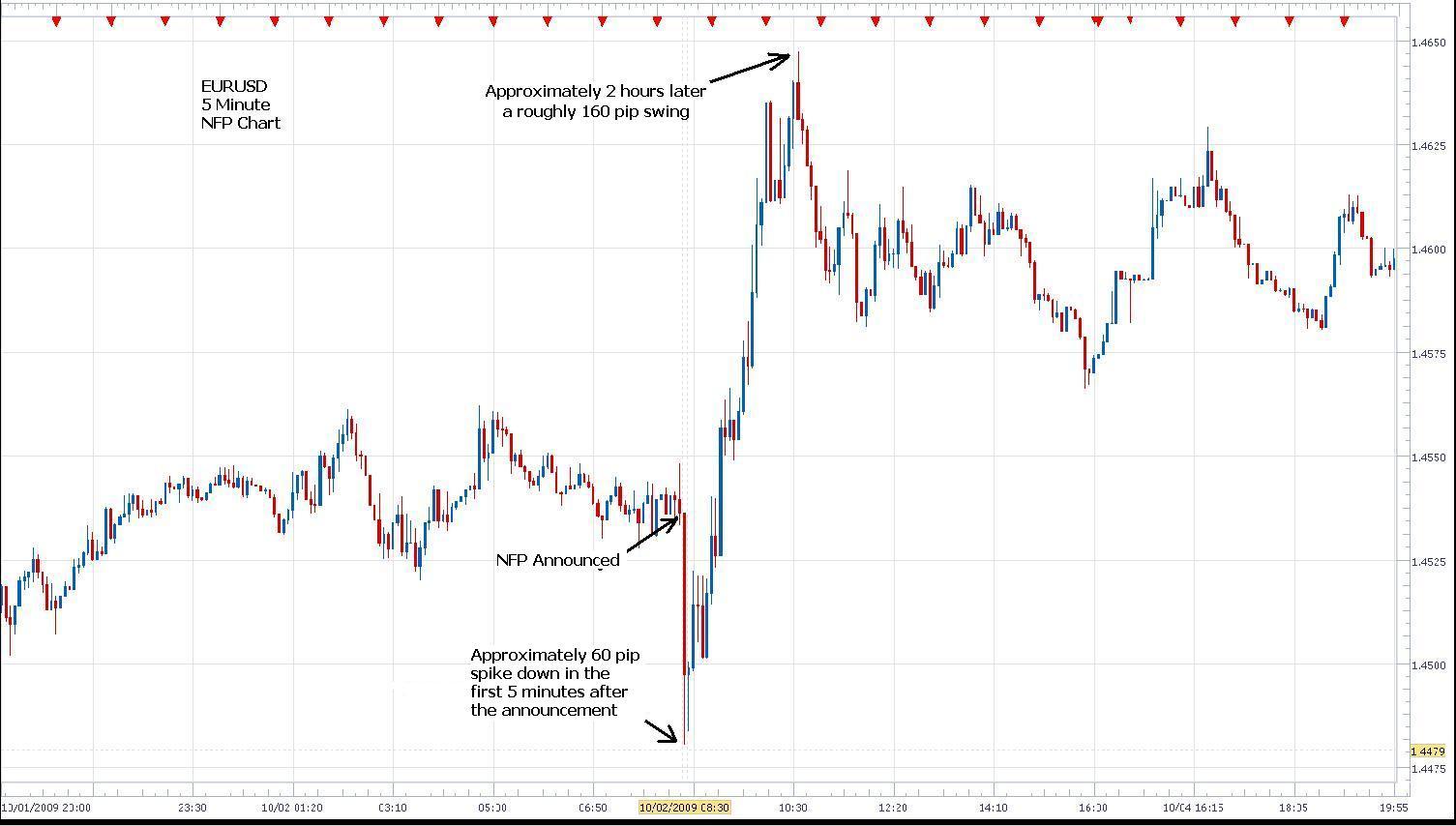 NFP’s is an important economic number and therefore has the greatest potential to move the market of all the other economic releases.  Many traders can make or break their month in the short time following this release.  NFP’s importance can be broken into two parts.  Firstly, the employment number is one of the best gauges of economic growth and more importantly, the potential for future growth.  The Fed watches this number closely as a leading indicator for the economy.  Secondly, many traders actually wait for after the NFP is released (regardless of what the number is) before entering into trades, just to make sure that are no surprises for their position.

It is important to note that there is generally very little liquidity at the time of NFP release.  This is because hardly any of the big banks are in the market at those times.  Liquidity is like an ocean suddenly shrinking to the size of a wading pool during the release.  Sometime later, the liquidity generally returns to normal.  Many other major news events can have a similar reaction, though few tend to be as volatile as the NFP.