The US Dollar: The World’s ’Safe-Haven’

This article will examine the what’s and why’s of the times when you might want to pick the one percent investment instead.

One look at the AUDUSD chart from 2010, which saw lows of .8000 move up to 1.1000, the entire period of which positive rollover was being accrued for holding long positions in the pair, will confirm the fact that, typically, investors will follow yield. 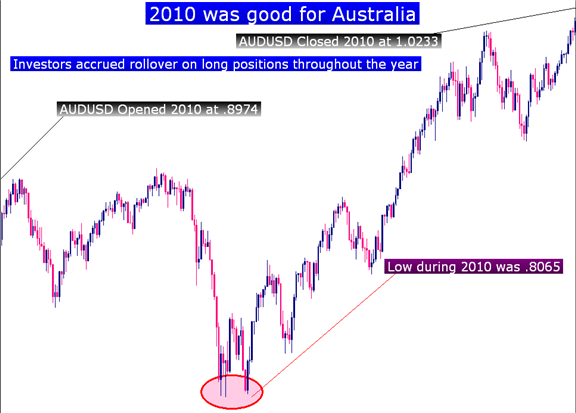 But what happens when the market environment isn’t normal?

These are just three of the bigger and more recent examples, but you probably see where this is going: While a five percent investment will often be more attractive than the one percent investment – once the question of losing your investment altogether comes into play, the ‘safety’ of each option becomes all the more important.

As a matter of fact, if you look at the above chart you’ll notice it wasn’t all roses and daylight for ‘The Aussie’ in 2010. I’ll post the chart below from a different angle than we had looked at previously: 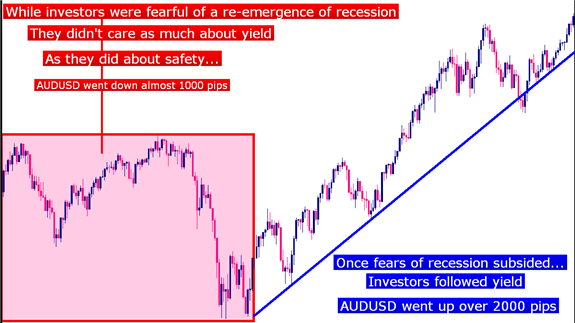 While the thought of an entire economy such as Europe, or Australia going bankrupt may seem ludicrous, we have to realize that investors, in all of their fashions whether they are hedge fund traders or central bankers – all hate to lose money.

And through the tests of time, the United States Treasury Bill has proved to be one of the safest financial instruments the world has ever seen.

In the article, How Treasuries Impact Forex Capital Flows – we saw exactly that; how traders in panicking markets will often choose ‘return of capital,’ over ‘return on capital.’

The above chart illustrates this: If investors are fearful of a recession – they will buy US Dollars despite the fact that any potential returns may be minimal. They are instead choosing ‘safety’ over ‘profit potential.’ They can then invest those US Dollars into Treasury Bills, and despite the fact that they may have smaller profit potential there is also a far smaller risk of actually losing their investment.

Because – if I can earn a rollover payment for holding the position at 5 O’clock today – but the trade loses more money than I make in rollover – what is the point?

So if there is perceived economic weakness, investors may run to US Dollars in an attempt to avoid the chaos. This is often called a ‘flight-to-quality,’ or a ‘safe-haven run.’

A strengthening currency, much like what we’ve seen in Switzerland or the ravaged economy of Japan, can rapidly change the balance of payments and cost a country greatly. But because of the sheer size of the United States economy, investors continue to look for ways of safely parking money so that it may not be exposed to principal risk.