The BIG idea on being bearish EUR/JPY:

A troubling month for risk has seen key indices down 7-10% while geopolitical trouble in the EU surrounding Italy’s budget is opening up the argument for EUR/JPY downside that is supplemented by increasingly tight financial conditions in Japan.

Are Q4 Currency Forecasts are fresh, grab them for FREE here

The BIG Picture on EUR/JPY: 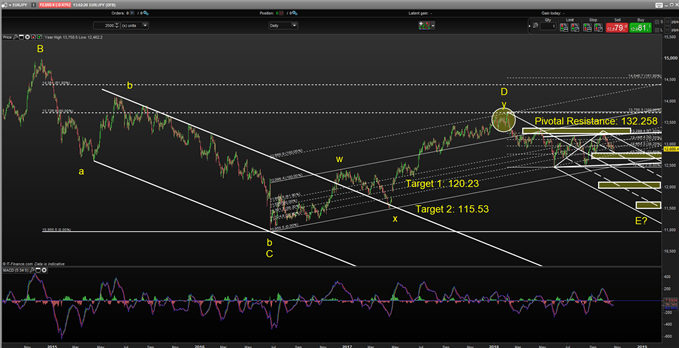 This trade will be triggered on a break to new six-week lows at 127.87 JPY per EUR. Traders with a bullish outlook are using 127.87 as a bias-defining level so a break below could trigger a run of stop losses that take this pair lower.

The chart above shows a choppy move that has recently resumed the path lower since late-September. Additionally, the move higher over 2016/2017 seems to have topped at a confluence of Fibonacci extensions and the Fibonacci channel that is highlighted above.

A break below 127.86 would trigger a sell and could lead us into to move to the laterpart of a multi-year triangle in EUR/JPY that could have an aggressive bearish finish of a broader triangle to either 120.23 or 115.53, both key Fibonacci levels.

What is a Triangle Pattern in Elliott Wave Theory and How do you Trade it?

Traders triggered into the trade should anticipate some two-way volatility around 124.80, which aligns with the December 2016 high and current-2018 low as well as the channel support drawn on the chart. However, a further breakdown could favor a move lower within the Andrew’s Pitchfork drawn on recent pivots.

A break above 131.06, the 50% point of the 2018 range, would tilt the odds against this trade idea, and traders may be served best sitting on the sidelines until clarity arrives.

The risk of this trade is fairly wide at 319.5 pips through the large profit targets of 2.3X and 3.8X may encourage traders to reduce to the trade size so they don’t expose themselves to too much risk.

The BIG Story on Bearish EUR/JPY:

The sell-off in risk continues to catch investors who hoped the risk rally led by FANG-giants to last forever. However, throughout October there has been a sell-off that smells a lot like late-January early-February, and now Japanese Yen strength looks to be a broad pattern.

The leading global asset (aside from Amazon) in crude oil has fallen 5.6% when looking to the North American benchmark, WTI while Brent has fallen 7.7% since the start of October.

Typically, when risk-off sentiment takes hold of the market, currencies that weaken in times of risk-on behavior like the Yen start to strengthen, and that is a large premise of this trade working.

Another premise is the worsening situation for the EU with the unprecedented rejection of the Italian budget proposal. Despite the European Commission rejecting Italy’s draft budget proposal, IT Prime Minister Conte said Rome’s planned deficit hike in 2019 “won’t be touched at the moment.”

This disruption between Brussels and Rome is sending shockwaves through the European bond market. Specifically, traders can see the 10Yr BTP (Italian Debt) – Bund (German sovereign debt) yield spread has widened, and while this has happened, the EUR has weakened against the JPY.

The chart below shows the BTP-Bund spread (orange area) inverted with an overlay of EUR/JPY (line.) As the spread widens on the concerns with the Italian Budget, we could continue to see EUR/JPY weakness. On Tuesday night, Greece’ Finance Minister, Tsakalotos said that Greece would not issue bonds until this situation is corrected, which could take a while and shows that other EU nations do see this as a sticking point in unity. 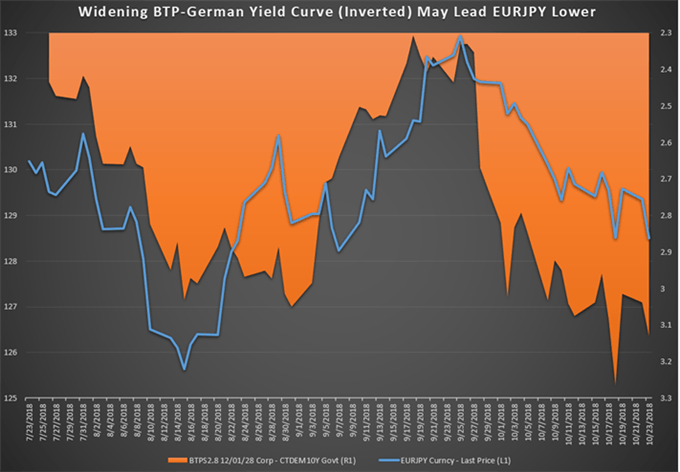 Added for good measure on the trade, the Goldman Sachs Financial Conditions Index (not pictured) in Japan has reached unusually tight levels while the BoJ is expected to shift rhetoric hawkish, which could keep the JPY unusually strong.

Tight financial conditions in Japan will also be able to be verified via the Topix, which would also be expected to drift lower if the BoJ turns marginally hawkish. This development could add to the haven flows lifting the JPY and possibly sinking EURJPY.