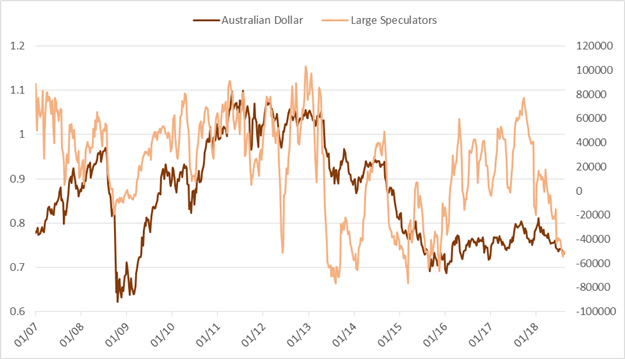 There’s a lot of negative cross-winds that seems to be going against the Australian Dollar towards the end of August, and speculators have taken note. The main topic is the US trade war, in which Australia is caught in the middle of as they wonder whether they should appease their friend, the US or their customer, China?

Copper, once seen as a global bellwether for economic demand, recently fell into bear-market territory on the perception that demand could go into the dumps if the trade war ushers on. The 20% drop, aggressive by any measure only took two months to accomplish.

Adding insult to injury, last week, PM Malcolm Turnbull lost his seat leading to a new Prime Minister, and what could result in earlier than expected elections. The latest developments down under have resulted in a widening yield spread between AU and US Treasury 10-year yields in favor of the US by 25 bps.

Traders should be on the look for what could emerge from this short-term volatile political backdrop. New PM, Scott Morrison could bring a hefty new spending package supported by an already envious fiscal scene in AU.

Don’t Look Now, but AU Terms of Trade Are Quite Healthy 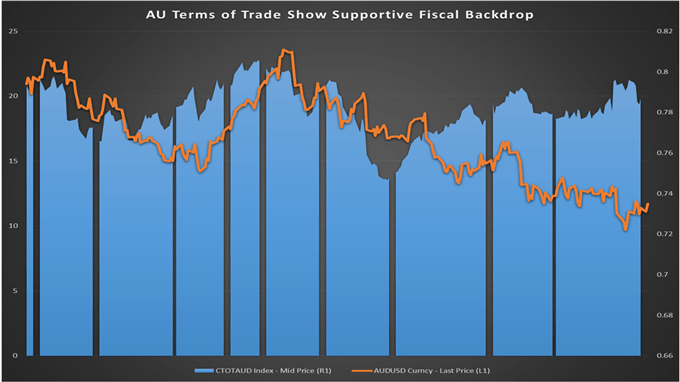 Investment banks are thinking much of the concern is not warranted. There may be an economic stimulus that follows AU’s new leader alongside a step up by China to firm up their economy. This one-two punch could bring a wave of support for AUD to strengthen or to be seen as a key value play.

Terms of trade simplyindexes the value of exports to imports. A rising Terms of Trade shows a favorable fiscal position as what you sell is worth more than what you buy offshore.

This could mean that while AUD has been discounted aggressively due to fears of Trade War ramifications and an uncertain political future, there could be upside opportunity on the horizon.

Looking to the Price Charts of AUD/USD

The chart above indicates bullish momentum per MACD at long-term price support. The support range (yellow) was the 2017 price low to the 61.8% retracement range of the 2016-2018 when AUD/USD topped above 0.8100.

The MACD momentum picture should give traders pause who are short AUD/USD. The bullish divergence aligns with a potential Elliott Wave patterns indicating the bearish correction since January has run its course. The bullish view would be validated on an impulse above 0.7480.

Bears are holding on to the bearish-channel that the price has traded within for most of 2018. A break above the falling channel could be the initial indication that this trade may play out well (though it may be a false break), and that Aussie may soon see a reversal of malfortune.