“There has never been a protracted war from which a country has benefited.”

The Australian Dollar appears a clear proxy for the collateral damage of Trade Wars that may be far from over.

The People’s Bank of China has recently made a move to stability the Chinese Yuan ahead of the Reserve Bank of Australia’s August meeting. Traders should appreciate the broader downtrend, which Hedge Funds have been riding and adding to with a preference for the continuation and not a reversal. Trade conflict via tariffs continue to persist and escalate, but despite the deficit that the US has with China, there has been a stern voice from Chinese media that the government is ready to fight.

Traders should watch for shockwaves that hit the Yuan traversing over to the Aussie.

Traders are a funny set up people. Sometimes they buy low and hope to eventually sell high. Others (I’m in the second camp) look to sell low and buy back lower in anticipation of momentum taking over.

Traders can see on the chart above that starting in September 2015, AUD/USD began a 2 year 4-month that appears to have run its course as of January 2018 when it topped at $0.81 per AUD. Since then, we’ve seen a 9% decline. The recent move has since mid-June has been a consolidation move.

In an extended (and extending) trend, consolidation tends to precede continuation as opposed to a reversal and that is the bet I’m backing on this trade. A break below $0.7318 and close would likely validate the move to the bearish targets of $0.7126 & possible $0.6880 per USD.

A possible catalyst may come from the RBA who may take a stance similar to the RBNZ who recently said the next move could either be higher OR lower. Such a move would likely further encourage the bears backing further AUD weakness.

Hedge Funds Continue To Favor Further AUD Weakness – Me Too! 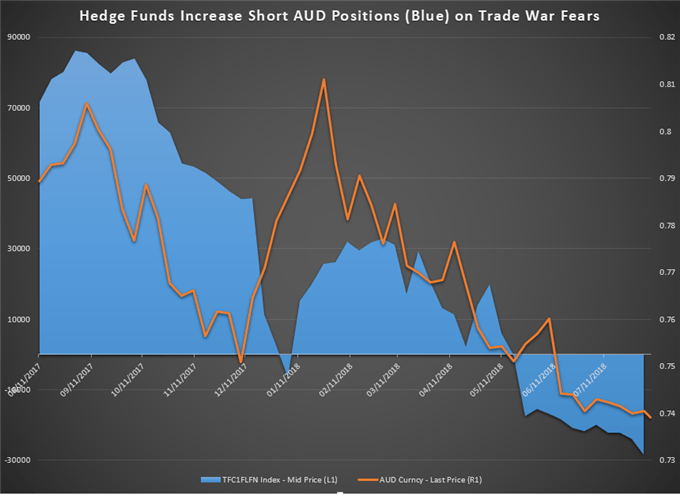 Institutional positions can tell you a lot about the path of least resistance in markets. The leveraged funds, or hedge funds, have had a strong bearish bias on AUD futures with a small reprieve in January and February that saw AUD/USD test $0.81 before jumping back on the short side that has led to the current decline.

If the trade wars intensify or the RBA softens their stance further, the hedge funds could increase their short positioning and in so doing, help AUD/USD reach the bearish targets I’ve laid out.

Should the RBA hold a more hawkish (tightening) view or the Trade Wars disappear like a vapor on the geopolitical risk scale, then a move above $0.7475 would say the risk is no longer worth holding the trade (should the trade be triggered,) and I would be exiting the trade to reassess the landscape.

Add More To Your Analysis Here:

Are you looking for longer-term analysis on the U.S. Dollar? Our DailyFX Forecasts for Q3 have a section for each major currency, and we also offer an excess of resources on USD-pairs such as EUR/USD, GBP/USD,USD/JPY, AUD/USD. Traders can also stay up with near-term positioning via our popular and free IG Client Sentiment Indicator.