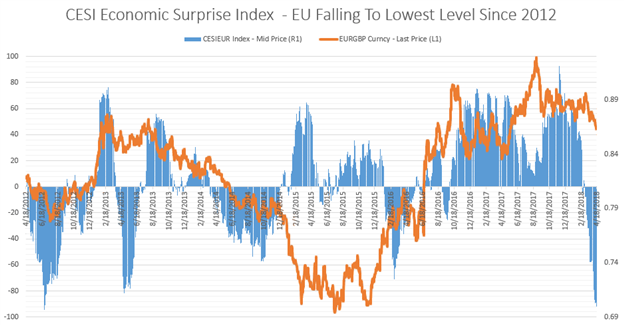 Initial Target/Point to bring a stop to break even:85

Swing Target (If not holding trade :)Hold with trailing stop

If you are looking to create your own trading ideas, you may enjoy our FREE Trading Guides

Things appear to be bad in Europe, at least when looked at in relation to economist’s expectations. A look at the Citi Economic Surprise Index for the EU, and you can see that the index has recently hit a level not seen since 2012 showing that economic data releases are disappointing.

A Weakening EU Economy May Weight on EUR/GBP

While the EU economy is having a rough time, the UK economic data has helped propel bets that the Bank of England may restart discussions on rate hikes. Recently, the Pound Sterling traded to the strongest levels since the day that followed the Brexit vote against the US Dollar. Additionally, UK wages increased on Tuesday by the most since 2015.

The Bank of England is currently seen hiking rates just once in 2018, which aligns with Carney’s “limited and gradual” comments with a hike potentially coming at the BoE’s May 10 meeting. The toss-up, which will likely drive Sterling’s spot value is whether or not a November hike could develop, which would likely GBP higher against haven currencies and the EUR and USD. For now, the median forecast for the second hike comes at the February 2019 meeting.

Adding to bullish consensus for the British Pound is Said Haider, a macro hedge fund manager that was up 14.5% in Q1 per Bloomberg who is bullish on the pound and anticipates further USD weakness. Haider noted that EUR/GBP is one rate that has not caught up to the Brexit sell-off like others have with EUR/GBP trading at 85 pence per EUR whereas it traded at 76 pence per EUR ahead of the vote.

FX Overbought/Oversold Readings As Of April 17, 2018 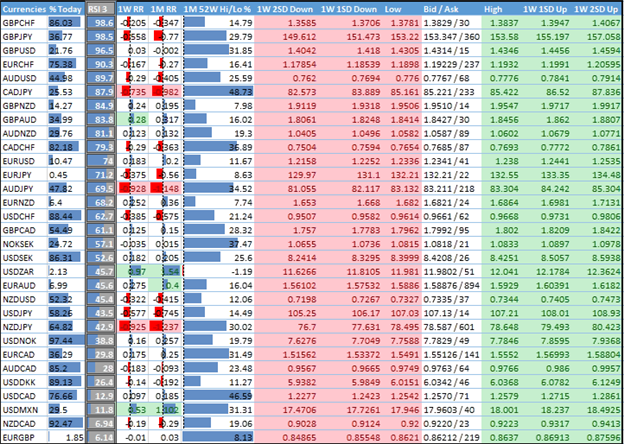 Put in other words, the British Pound is the most bid currency in the G10 + crosses right now with the havens JPY and CHF on the back foot. The reasons for GBP strength are building and here are a few:

The chart below shows a recent move where GBP broke to the highest level (lower on the chart) against EUR for 2018 as it looks to retrace ground lost after the Brexit vote.

An extension of the initial move down from the lower high in August to the top of the corrective zone highlighted on the chart would initially target 83.94 pence per EUR. An extension would favor a move toward 80.40 pence per EUR that would likely be realized if the BoE surprised the market with hawkish rhetoric when they meet on May 10.

The downside view would be invalidatedon a possible move above 87.25 that aligns with the April 12 high and the 1W 1 std. deviation move above the one week outright forward.

Not familiar with Fibonacci analysis, check out this insightful article