*Emerging Market Currencies Are Finding Favor Due To Yield

*ZAR May Catch Up As Political Risk Dissipates 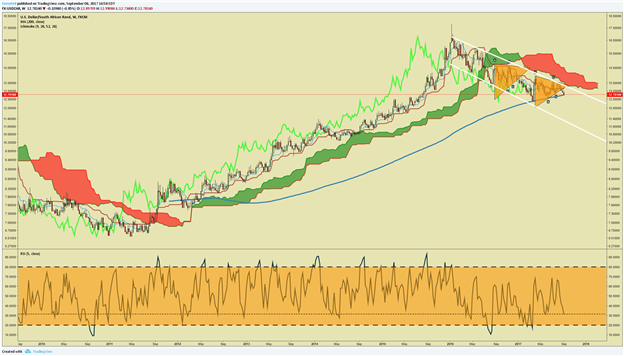 Many traders know by now that the Dollar downtrend is turning from a phase into an environment. In other words, the USD Downtrend could have some way to travel before it is through and that could mean further USD losses. Because FX is relative, the following question isrightfully, what against the USD could be a good trade?

Here's a technical breakdown on the US Dollar Index

Recently, the South African Rand (ZAR) has been consolidating against the USD. Such consolidations often favor continuation of the prior trend, which for USD/ZAR is lower. Look at the chart below, and you will see three components worth your attention.

First, the consolidation pattern is known as a triangle. It typically signifies that time is being consumed before the next big move. It’s fair to follow the adage that shocks happen in the direction of the trend. With USD/ZAR and most other crosses where USD is the base pair, that trend is lower. Therefore, we would anticipate a further breakdown in the pair that would favor further ZAR strength.

The second thing to notice is that USD/ZAR is trading right near the 200-Week Moving Average (WMA). Surprisingly, this long-term moving average has seen action across major currencies pairs such as EUR/USD, EUR/JPY, AUD/USD, EUR/CHF, USD/CHF, AUD/JPY, CAD/JPY, USD/CAD and NZD/USD. As you can see, many of the pairs have been USD based ones suggesting we’re shifting from a larger USD bullish environment to a bearish environment. When markets trade below the 200-WMA, it is often a sign that further selling pressure could follow.

If USD/ZAR trades below the 200-WMA after a triangle pattern, such a move could favor a move that retraces the trend higher since 2011, and the higher low from 2012.

Lastly, you’ll also notice that USD/ZAR is trading below the Weekly Ichimoku Cloud. The price relative to Ichimoku is important for multiple reasons, but I’ll hold it to three. First, trading below the cloud favors a longer term downtrend. Second, momentum tends to be one of the safest paths for a trader to travel in markets as themes in FX often prevail for weeks, months or years and fighting such pervasive themes are often futile. Lastly, the bounce into the cloud, thanks in part to the consolidating triangle could mean that we’re about to see a strong move that would favor entering near the spot or a breakdown below 12.56 to catch the move lower should it extend.

A move below the 200-DMA (12.7679) would favor that the bearish development is being confirmed, and traders could look below the June low 12.56 to the 2017 low of 12.31 and below. Traders wishing to hold on to the trade should keep an eye on shorter-term Ichimoku charts (i.e., daily) to confirm the trend is still bearish and favoring their exposure.

The macro backdrop is also worth considering and may provide further support for the downtrend. There has been an amazing rally in metals, and the carry trade where traders are buying a high-yielding currency like ZAR while selling a low yielding currency like USD remains attractive. The attractive carry environment is thanks in large part to the underperformance of developed market yields both of which help to support the USD/ZAR downside and other Emerging Market currencies like MXN.

An invalidation of this trade would happen on a break above the August high of 13.53.