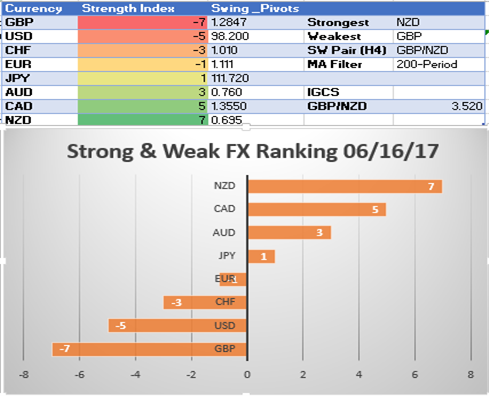 Point to Establish Short Exposure: On pullbacks below 1.3390

If you are looking for other trading ideas, check out our Trading Guides

The Canadian Dollar was not expected to steal the show this week given the FOMC announcement and the Bank of England’s first rate announcement after the fumbled UK snap election ahead of the formal Brexit negotiations, but that is exactly what happened. Earlier in the week, two central bankers in Canada, Deputy Governor Wilkins and BOC Governor Stephen Poloz provided the market with a dose of hawkish language that caused markets to begin pricing in a possible BoC rate hike in H2 2017.

Carolyn Wilkins said in a prepared text that the BoC, “will be assessing whether all of the considerable monetary policy stimulus presently in place is still required.” In other words, easing is no longer in the picture and tightening is now the question in play. On Tuesday, Poloz shared that while it’s too early to celebrate, the BoC sees that the “economy is gathering momentum” and the BoC’s interest rate cuts have “done their job” amid the weakness in energy markets.

The comments allowed the Canadian Dollar to post its biggest two-day gain in a year vs. the USD, and the gains continued throughout the week. To be fair, the Fed had their own hawkish surprise on Wednesday, but there is the doubt that the Fed will be able to hold true to their hawkishness as US Data per the Citi Economic Surprise Index has hit its lowest reading (showing large and persistent economic disappointment relative to economists’ expectations) since 2011.

So after the dust settled on the week, it appears that the Bank of Canada is on the move when markets were focused on the mounting losses in Crude Oil. You can tell the market was surprised by looking at front-end yields from Canadian sovereign debt that moved much more than front-end US sovereign debt yields. The Canadian 2-year yield rose by 20% or 17bps as markets sold fear of sooner-than-expected BoC action. The front end yield on US sovereign debt is practically unchanged, and yields ended lower on the weak as weak US data continues to mount.

When looking at the price chart, you can see a potential behavioral shift is developing. You can see that a choppy uptrend from May 2016 in USD/CAD is in peril and a breakdown could bring a similar move lower as we saw in early 2016. If the breakdown extends, which this pick is anticipating, we could see a move to and through the current 2017 low and toward the 2016 low of 1.2460.

Further BoC hawkishness could propel CAD vs. USD toward 2016 lows 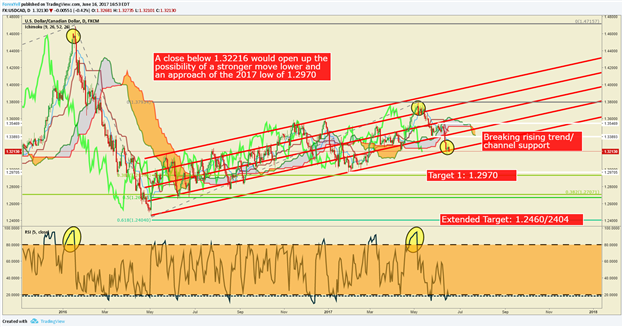 Sentiment Analysis: Retail longs fight the trend in USD/CAD, possibly to their own peril 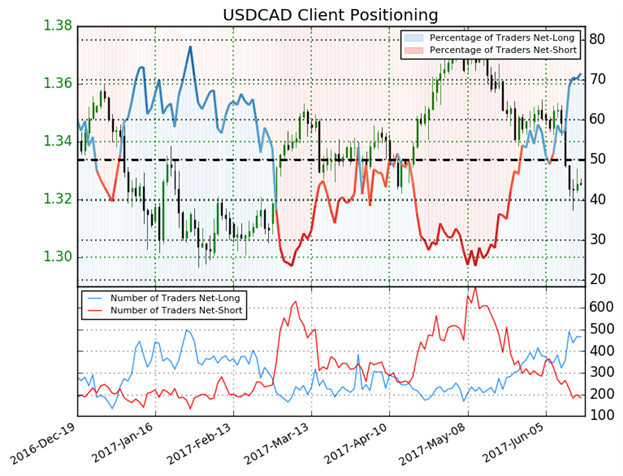 We typically take a contrarian view to crowd sentiment, and the fact traders are net-long suggests USDCAD prices may continue to fall. Positioning is less net-long than yesterday but more net-long from last week. The combination of current sentiment and recent changes gives us a further mixed USDCAD trading bias. (Emphasis mine)