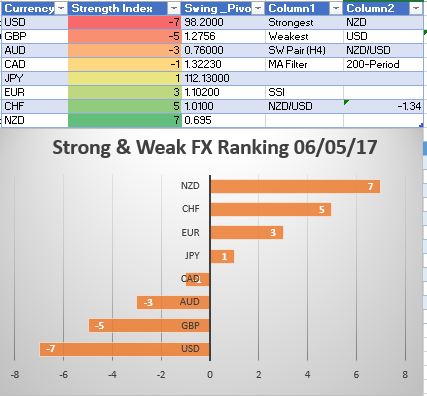 If you are looking for other trading ideas, check out our Trading Guides

Given the price action in Q4 2016, few would have guessed the banner first half seen in many EMFX currencies, which in many cases were led by the MXN. Now, as we enter into the last month of H1 2017, USD/MXN is sitting near a zone of support and looks poised from technical and fundamental analysis to extend to the downside on further USD weakness and MXN strength.

USD/MXN spot is currently trading at 18.4 after a ~1.9% rally in MXN, making it Monday’s best performer on the back of regional elections that helped quell concerns that the incumbent President Enrique Pena Nieto’s political party would not lose governorship in the country’s largest state.

On the chart below, you can see how the price is trading below the Ichimoku Cloud and a Trendline drawn from 2016 low, which favors bearish continuation over a bullish reversal in the current environment. Monday’s rally provided MXN with its strongest gains since March, and a move below 18 could take longs that are more stubborn out of the market and help propel MXN higher vs. the USD taking the pair down to 17.8 and possibly 17.15 if USD weakness persists.

A recent strong/ weak analysis shows that among the G8, the USD is technically the weakest. The weakest label goes to the currency that is trading below the respective 200-MA the most on a 4-hour chart when compared to peers. For traders, like me, who prefer to see continuations over reversals, I would favor an acceleration of MXN gains if the price of USD/MXN can break and below the series of previous lows over the last year near 18.

Another point worth mentioning that could help MXN trade stronger against USD is that the “hunt for yield,” is still alive and well. Naturally, that could help show why the market favorably views the political win for PRI as an opportunity to find relatively cheap yield. The yield in MXN is 6.75% per the country’s deposit rate, which has moved from 3.75% over the last year. Additionally, on the back of the RPI party winning the election, there has been a parallel shift lower in the implied MXN volatility curve that could favor further capital flows into the higher yielding currency that is perceived as being less risky per implied volatility.